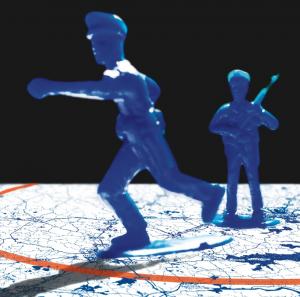 A provocative, engrossing, multi-media, theatrical performance that asks serious questions about our impact on climate change.

This is a really great idea: the two performers who led us through the scenario are outstanding, and the mixed-media simulation and X Factor-style voting is neatly handled.” Lyn Gardner, The Guardian

3rd Ring Out is at once a performance, a game, a simulation and an artistic event. Held within two shipping containers kitted-out to look like emergency planning and strategy centres, it is a provocative, engrossing, multi-media, theatrical performance that asks serious questions about our impact on climate change. 3rd Ring Out (2011) was produced by Sophie Larsmon of Independent Productions, for Metis Arts, between May and September 2011 during which there were 90 performances across 2 locations (Watford and Edinburgh) with 680 people attending the simulation in THE EMERGENCY CELL. It is estimated that another 300 people visited and engaged with the installation in the THE STRATEGY CELL. The project engaged 19 artists.

Emergency cell being lifted into placeHaving originally been created in 2010, 3rd Ring Out (2011) took place in two adapted shipping containers fitted out with computers, projectors and sound equipment to create a dramatic immersive environment. One container was named THE EMERGENCY CELL, and the other was named THE STRATEGY CELL.

THE EMERGENCY CELL hosted the simulation, which transported its 12 ‘audience members’ to the East of England (focusing on the Suffolk Coast). At the centre of this shipping container was a large ‘map table’ showing this area around which twelve audience members were seated. One actor played the role of team leader, taking the participants through an immersive simulation set in 2033, where there was an emergency caused by climate change. The participants, ‘seconded to this region of the UK’ were led through a developing narrative and were asked to vote at key stages; the results of these votes took the narrative off in different directions. Each performance lasted approximately 60 minutes, and there were 6 ticketed simulations a day.

Below is a selection of feedback from people who worked in 3rd Ring Out’s EMERGENCY CELL.

It was great to have the opportunity to develop the work further and to expand on some of the themes and concepts from last year both in terms of the performances and the visual experience of the piece. The public engagement with the work in Watford was particularly satisfying with meaningful interactions and a much greater sense of event than was achieved in over-saturated context of Edinburgh. (Co-director)

The emphasis on audience participation and snap-decision making was great in keeping people engaged. (Local Artist)

The fact that the audience got plunged right in the middle of the situation, without much of a preamble, and the rising tension really worked – it transported you into another world very quickly, which made the end all the more dramatic. I would have liked a bit more time to familiarise myself with the map of the area. (Local Artist)

THE STRATEGY CELL was kitted out in a similar way to THE EMERGENCY CELL, but the map at the centre of the container was of the local area (i.e. Watford or Edinburgh). THE STRATEGY CELL hosted evolving installations, and created a platform for the audience/participants to think about and express their views on the future of their local area. The concept was developed over time, and became fully realised in Edinburgh.

Below is a selection of feedback from people who worked in 3rd Ring Out’s strategy cell.

Working with local artists to inject a wide range of individual ideas and generally the further development of the Strategy Cell for Edinburgh was a great success and feels like something that could easily be adapted for future Cities. (Co-director)

The mechanics of the voting system and different bits of paper etc seemed a little confused, and could probably be streamlined in the future… (Local Artist)

I thought the fact that multiple storylines emerged, accompanied by the futuristic documents was excellent. (Local Artist)

I thought the installation worked really well. The artists were fantastic and some of the responses we got from the public were brilliant. I guess the main problem was physical space: it was difficult to move around with a large number of people in there and having to close the door to make the video calls kept cutting people off. What’s really important is also understanding how the performer interacts with the simulation. We’ve created a brilliantly supportive performance environment where with all the performer prompts it’s very difficult to feel lost. The downside is that even the most minor technical change can really throw you. (Performer)