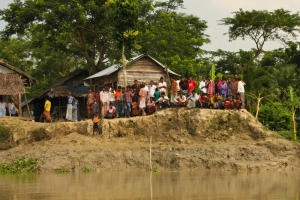 In 1967 an incredible showcase for electronic music and light-shows was held at Camden Roundhouse in London. It was called ‘A Million Volt Light and Sound Rave’ and featured the mythical recording ‘A Carnival of Light’ by The Beatles which was made especially for the event and has never been released. On the occasion of Climate Week 2012, the Environmental Justice Foundation (EJF) is recreating ‘A Million Volt Light and Sound Rave’ with performances from influential electronic artists with an additional emphasis on sustainability and solutions to climate change.

The event will be powered as much as possible by sustainable energy sources, including audience participation through green energy generators such as kinetic pavements, dance floor mats and bikes. Dancers and performers on stage will wear outfits that light up through the power of their own movement. The theatre of the event will be further emphasised by harnessing the power of acrobatic movement to light the show. As well as reducing the event’s carbon emissions, this renewable energy will act to empower the participants who create it, inspiring people to think twice about their impact on the environment and what can be done to prevent climate change.

The money raised will go towards EJF’s wind turbine project as a unique and innovative concept to increase the UK’s supply of renewable energy and reduce emissions whilst generating sustainable funds for the charity and its ‘No Place Like Home’ climate refugees campaign. This campaign highlights the needs of the estimated 150 million climate refugees who will exist by 2050, and who will derive no protection from existing international refugee laws. EJF believes that climate change is one of the most profound challenges to the rights to life, food, health, water and shelter, and are working to get the voices of those most vulnerable to climate change heard internationally, with the goal of securing a legally-binding agreement on their future.

Climate Week is a supercharged national campaign and a fantastic opportunity to inspire, empower and celebrate communities trying to reduce their carbon emissions. It is a pioneering annual event in the UK, backed by countless groups and high profile supporters. EJF’s ‘A Million Volt Light and Sound Rave’ is a creative celebration of art and sustainability which aims to contribute towards Climate Week’s goal by raising much needed awareness and funds regarding the social and environmental, national and international effects of Climate Change.

‘A Million Volt Light and Sound Rave’ is also partnered with Meat Free Mondays who promote social change through adapting weekly diets to include one meat free day. In light of the vast carbon emissions produced by the meat industry, this change helps reduce individual environmental impacts and collectively tackles climate change.

EJF is delighted to have been awarded funding from APE for the first A Million Volt Light and Sound Rave. The funding is very welcome help towards the costs of establishing this iconic event which will raise awareness of the plight of climate refugees and the simple actions people can take to reduce their own carbon emissions. We are thrilled to have APE’s endorsement and look forward to collaborating with them as this exciting event gets under way.