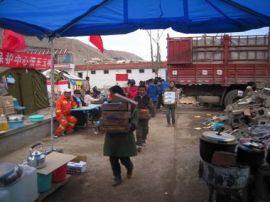 Goods and equipment supplied by ROKPA to help relieve the suffering of the victims of the earthquake have begun to arrive in the Yushu region. The English teacher at the ROKPA Yushu Orphans’ School has written the following:

“… thanks to all Rokpa staff and others who are sending us help and support. I hope to receive pencils and notebooks very soon. No matter who you work with in this situation, the real satisfaction is to see people who lost everything leaving our camp with some food, a warm blanket and a drop of happiness in their eyes.”

As the first school to open and the only one in which all the children survived, the ROKPA Yushu Orphans’ School has taken in three new orphans.  Meanwhile with snow and sandstorms, lack of fuel, no toilets, thin tents and most people deeply traumatised, the situation in Yushu is grim. There is a lot being done on the ground now, but re-building ROKPA supported projects including the Yushu Orphanage will be a huge task.

At this moment, more than 90% of the buildings in the Yushu region are destroyed or impossible to use because they are unsafe. Official and unofficial counts of the dead vary from 3,000 up to 10,000, but it is very difficult to establish a proper record because even before the earthquake, the number of people living in Yushu wasn’t clear. What can be said for sure is that there is a lot of suffering and misery, not just in the immediate aftermath of the earthquake, but in the intermediary phase before reconstruction and in the longer term to rebuild a future for people in Yushu.

The problem will not be solved overnight. Help will be directed to children with no parents, old peope who find themselves isolated with no one to care for them, the preservation of culture and monastic life (a large number of senior monks have died in Yushu), not to mention reconstruction of all the buildings which are now reduced to piles of rubbles or dangerous ruins.

Please accept our very grateful thanks for the wonderful donation from Artists Projects Earth, to ROKPA UK for the purposes of supporting victims of the recent Yushu Earthquake.