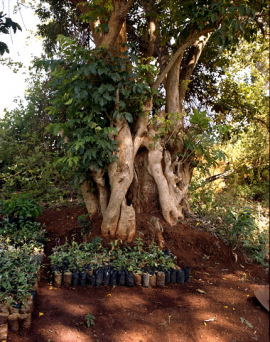 Responding to climate change from the grassroots

The overall project aims are to raise awareness on the crucial roles that rural women and their communities, trees and forestry play – in Africa, the UK, and globally – in tackling climate change; and strengthening African rural communities’ understanding of climate change and REDD+, and their capacity to take action.

Thanks to APE fund and partnerships with other like-minded organizations, we have been able to implement our Climate Change programme addressing the project’s main goals:

a) Increasing the understanding of climate change, its impact, mitigation and adaptation approaches at the local community level in Kenya (both in terms of action and rights)

d) Advocate at the 16th UNFCCC climate change negotiations in Cancun, December 2010. The Green Belt Movement (GBM) sent a delegation of four staff members and other associates to attend the 16th United Nations Framework Convention on Climate Change (UNFCCC) Conference of the Parties (COP) in Cancun, Mexico, from 29 November to 11 December 2010. The GBM delegation played a central part in advocacy and awareness campaigns on community-lead initiatives in the protection and conservation of forests, and its contribution towards addressing the challenges of climate change and poverty alleviation.

Furthermore GBM advocated the full and effective participation of the women, indigenous peoples and local communities so as to ensure that the International Global Climate Change Agreements addresses their rights and needs as well as promotes transparency and accountability in decision making.

– co-hosting an official UNFCCC side event on “Climate Change Justice and the Grassroots perspective on REDD+” on 4th December 2010 to discuss on Climate Change Justice and grassroots perspective on climate change mitigation and adaptation, during which GBM shared best practices, experiences and lessons learned from the GBM community based re-afforestation project in Aberdares ecosystem.

– Attending the Woods Hole Research Centre workshop as to share GBM’s experience on monitoring forest and re-afforestation climate change projects in Kenya with a particular focus on our Biocarbon. Peter Ndunda GIS specialist at GBM was able to illustrate it. http://www.whrc.org/policy/cop16_workshop.html

– Showcasing the Google earth mapping application and tools that have been developed to support the community based tree planting projects in Kenya and which provides the ability to visualize the location of the community tree nurseries and associated tree planting sites across Kenya, improving monitoring, accountability and reporting.

– Report on the development of REDD+ activities in Kenya and Africa through our website and news portals.

Further activities will be carried out in the lead-up to and during the next UNFCCC Climate Change conference COP17 in Durban, South Africa, where GBM will share its response to climate change through its community-based adaptation projects and highlight the voice and needs of local most vulnerable communities.

IMPACTS OF AGROCHEMICALS ON CLIMATE CHANGE