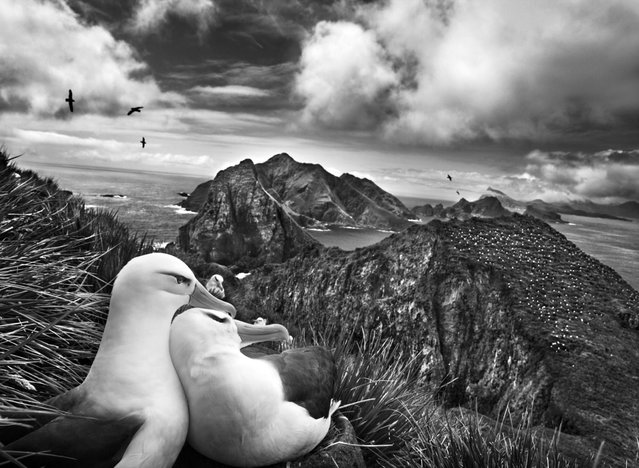 Artists Project Earth are in Paris! Our house band Rhythms Del Mundo is performing their new album, Oceans, live on Monday 7th December at COP21, to help raise awareness of climate change and ocean conservation. The album is also available as a pre-release, with all profits going towards ocean conservation and climate change projects worldwide. Listen and download now!

During this time, Artists Project Earth’s Founder and Director Kenny Young, and Trustee Herbie Girardet are participating in several COP21 events, holding a stall at the Green Zone, and pinning posters for the new album across the city! Keep up with them on Twitter.

This short blog post is from Herbie Girardet, on their first event – and reflections – at COP21.

Arriving in Paris on 5th December to participate in COP21, the very first event we participated in was a slide show of Sebastião Salgado’s magnificent photos of Amazon biodiversity and tribal communities. It was a most profound experience. It was arranged by Bianca Jagger at very short notice and, I am sure, will always be one of the great highlights of COP21.

Deliberately shot only in Black and White, Salgado’s images conveyed the glory of the innumerable life forms found in the Amazon region as an irreplaceable treasure that only foolish people would ever want to destroy. The many varied adaptations of tribal communities to the astonishing biodiversity of the Amazon region are shown not as primitive, but in their full glory. Salgado’s images also continually emphasise the intimate connection between forest canopy and the cloudscapes above in all their astonishing variety. Here is a world that is glorious in its completeness and inextricable interdependence.

In a short speech, Bianca Jagger drew attention to the threats to the Amazon and its people from dam construction, mining and deliberate fires that are used to convert vast areas of forest into cattle ranches and soybean fields. It is true that the delegates at COP21 are starting to notice of the need to protect and regenerate depleted forest ecosystems – but this issue still has a rather low priority. If all the negotiators were given a chance to see Salgado’s magnificent images, it would doubtlessly deepen their deliberations.