Rhythms Del Mundo (RDM) is a collective of top musicians and producers who since 2006 have released five albums to date in support of the UK charity Artists Project Earth. In chronological order these albums are: Rhythms Del Mundo: Cuba; Rhythms Del Mundo: Classics; Rhythms Del Mundo: Revival; Rhythms Del Mundo: Rio + 20 and the new album, Rhythms Del Mundo: Africa.
RDM have worked with some of the biggest names in the music business: from The Rolling Stones to Amy Winehouse; the Killers to Bob Dylan; Coldplay to the Red Hot Chili Peppers! The first four albums had a Latin vibe and the RDM collective included such luminaries as Ibrahim Ferrer and Omara Portuondo from the Buena Vista Social Club, and now with the latest album, some of the greatest African musicians in the world including Toumani Diabaté, Bassekou Kouyate, Ali Farka Touré Band, and Rokia Traoré have graced the band with their presence.
Overseen by legendary songwriter/producer Kenny Young, who co-wrote the famous ‘Under the Boardwalk’ and ‘Ai no Corrida’, Rhythms Del Mundo’s unique sound has carved its own niche in the contemporary music world. To date RDM have performed a select choice of live performances, including Live 8 in Hamburg (broadcast to an audience of a billion) and live concerts in Berlin and Milan, together with album launches in the UK. Future live shows are in the planning stage. These will include an Afro-Cuban line-up of renowned musicians with special guest stars.

Rhythms Del Mundo & Artists Project Earth: how it all started… 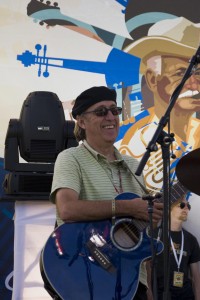 The concept of fusing the Latin sounds of the Buena Vista Social Club and Western musicians came out of a discussion my colleagues, Ron Oehl, the Berman Brothers and I had at the Sundance Film Festival in January 2005. The previous year I was writing music with a friend at his beachfront house in a little fishing village on the southern coast of Sri Lanka. A few months later that little village and many of its inhabitants were lost, due to the Tsunami. I was extremely moved and upset by the tragedy of so many lives being lost or altered forever. The village had to be completely rebuilt as well as the livelihood of countless fishermen and shopkeepers.

This was the event that sparked off this project. I knew I had to do something for those villagers. But what could I do? As it turned out, this project began to take shape with the formation of Artists’ Project Earth (APE), a UK charity whose Trustees and Advisory Board members helped formulate a way forward. We decided that ‘natural’ disasters such as the Asian Tsunami are terrible in their own right, but are often exacerbated by climate change. Humanity’s relationship with nature is the root cause of most disasters; even situations that seem initially unrelated to human activity such as drought, hurricanes and floods have a human heart. As my colleague and board advisor George Monbiot says ‘there is no greater threat to humankind than climate change!’

It was with these underpinning ethics that Rhythms Del Mundo and Artists Project Earth were born. The good thing is we will have fun trying to do what we can! The fun part is the music, the art, the dance and the many ways we will bring to the world’s attention humankind’s carelessness, and how we can change our bad habits.

So, off to Havana we went in search of the Buena Vista Social Club musicians. Why Buena Vista Social Club? Well it has been such a long time since we heard from them! And besides, I for one love Latin music, so why not combine it with the world’s great Western music and create some unique sounds to support our work?

My first stop was Sting. Back in the early 90’s I was a co-founder of a Rainforest conservation organization called Earth Love Fund (ELF) and I was working on a compilation album, ‘Earthrise’. I had been chasing Sting for a contribution of the track Fragile which I always loved. As we both were at the same rainforest function, I cornered him and asked if he would let me use Fragile for our album. He ‘ummmmed and aaahhhed’, until I insisted we were both working for the same cause: how could he refuse? Well, he finally gave in, we shook hands on it and the deal was done!

Only, the track that his record company sent was a Spanish version of the song! So I rang A&M Records and insisted that Sting had agreed to let us have Fragile not Fragilidad. They eventually agreed to let me have the track and Earthrise went on to become the official Earth Summit album and also a No. 1 album in the UK charts. The Spanish ‘Fragilidad’ track however stuck in my mind and I thought, why not start off this project with that song done in the Buena Vista style. I phoned Sting’s office and reminded Sting, via his management of that story and, “…by the way, would you mind if I used Fragilidad with the Buena Vista musicians?” Well that’s how that track came to be. It only took one day in the studio with Barbarito Torres on laud and the great percussionists of Buena Vista’s original players, we had a cool new version of that song and the Rhythms Del Mundo project was on it’s way.

Five years and three albums later, we have sold over one million albums and supported over 270 projects that have addressed this issues of climate change adaptation, mitigation and awareness-raising – and of course, helped some of the world’s most disadvantaged people to rebuild their lives in the wake of natural disasters.

You can also visit us at www.rhythmsdelmundo.org