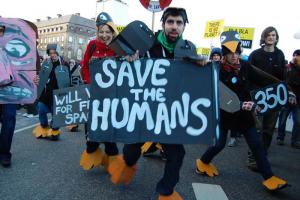 The climate crisis is an unprecedented challenge on an unprecedented scale. We need a new type of movement to confront this global threat. Climate change is a problem caused by human culture, thus we need to employ culture in confronting this crisis. To successfully stimulate change, people must feel the reality of the climate crisis and their role in determining its future course. Art might hold the key to unlocking the cultural shift necessary to turn the tide on climate change. This project, ArtShift, is designed to incite and inspire a creative response to the climate crisis among the rising International Youth Climate Movement, by arming this new generation with practical skills for creation and imagination.

260 Making a point though art activism

The ArtShift project will take its form as a ‘train-the-trainers’ tour to be conducted in September 2011 as part of the lead-up to the Powershift Europe Conferences. During this tour, experienced ‘artivists’ trainers will meet with local youth, activists and artists to skill-share techniques for the creation of activist art. The vital skills shared in these workshops will empower the larger European Youth Climate Movement with new tools to effectively and creatively employ the arts to advocate for social, political and cultural action to stop dangerous climate change. Workshops will be developed with local organizers to help create visuals for the actions following each Powershift Conference.

In addition, each workshop series will include a focus on techniques for the creation of art for mass mobilizations, and how to organize a successful ‘Art-Build Space’. These workshops will prepare local artists to create their own Art-Build as part of their regional PowerShift.

We would like these workshops to be conducted as skill-sharing exchanges and thus encourage local artists and activists to share their own techniques and knowledge about how to make effective art for social change and seek to learn more about the cultural traditions of protest art from different regions and to share those techniques with a wider audience and at other ArtShift Trainings.

If successfully embraced by the rising youth climate movement, art has the power to become one of the most effective tools we have in confronting the culturally embedded roots of the climate crisis. The youth of the world know know that this struggle will last our entire lives. To sustain our momentum and to win, we know we must make our movement as beautiful as the planet we are fighting to save. This fight is young and so are we. The struggle cannot be underestimated, and neither can we.