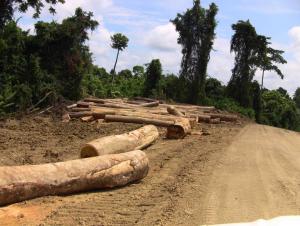 Over the past six months with APE support, EI publicized in PNG and to the world the ecological destruction, carbon and biodiversity loss, and social harm which results when ancient forests are harvested for the first time. EI’s consistent, hard-hitting and biocentric message is that future forests for both jobs and ecosystems depend upon ending primary forest logging; letting secondary forests age (some certified as well-managed, and others regenerating into old-growth); and planting non-toxic native mixed plantations  and well-placed ecologically restored native forests. Ecologically speaking, this is the best way to maximize old forests’ sequestration and continued removal of carbon; while of course all the other benefits of ecological intact forests as well.

Ecological Internet’s Asples PNG/Madang Project has stopped huge industrial logging that was then just ramping-up in the Ramu area. This was consolidated during 2010 with further campaigns. This million hectare rainforest valley in Madang Provice, Papua New Guinea was accessed by loggers for the first time and we shut them down with EI landowner organization, international campaigning, training local NGOs in international campaigning including social networks, and helping with peaceful protest and patrols by others and our staff. Some small logging continues, and this could restart. This struggle has been broadcast to the world that together helped stop the logging of carbon rich primary rainforests. During this APE project period of the past six months we did three alerts on the logging, and two on the mining project – matching global pressure to local demands. We believe they significantly resulted in delays and tactical victories to continue delaying the Madang rainforest destroying projects.

EI has continued to express the only consistent message of the option of ending primary forest logging in PNG, and basing development upon standing forests. This would have massive good effects for climate, biodiversity, ecosystems and local advancement. We have been interviewed by local media (though not too much to get out ahead of local voices), and generated just millions of protest emails. We have  established a formal international campaign with the message of the need to end primary forest logging as a keystone response to climate, biodiversity, water, ecosystems and just ecological sustainability – replicating our demands from PNG elsewhere with most recent impact in India, Madagascar, Australia and Ecuador. In each, EI has enjoyed massive victories in last six months. We will continue to work in PNG to the extent we can as we are bound by family ties.

As the name suggests, Ecological Internet are specialists in both global ecological sustainability, and IT and the Internet. In 2007 APE helped us upgrade the Climate Ark portal. That work continues to this day largely due to APE’s support, as we have rarely gotten grants for this online political ecology from other less ‘rocking’ sources.

EI’s central messages warn eco-crises are larger than thought and converging, the scale of largely greenwash responses is inadequate, and thus it is up to people power protest to achieve ecological sustainability. Ecologically sufficient means to avert global ecosystem collapse exist and are being obstructed by corporations, governments and biG NGOs. Policies like ending primary forests logging, use of coal and tar sands, and population controls are worth fighting for – if we want humanity and Earth to persist.

Ecological Internet runs the leading biocentric action community on Facebook and our ground-breaking biocentric portals at http://www.climateark.org/ – http://www.ecoearth.info/ and http://www.rainforestportal.org/ are thankful to APE for their support.

APE’s support allowed us to take our message to Papua New Guinea’s rainforest landowners – highlighting the dangers of industrial logging, and discussing alternatives to promote community advancement from standing forests. And we stopped some logging – for now – on the way.