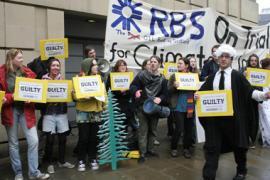 The project is the third phase of the Ditch Dirty Development campaign.  Phase one, has targeted the UK Government, calling for an end to the use of development aid to finance fossil fuel exploration and extraction projects.

Phase two has engaged 2000 higher and secondary education students in demanding an end to the Royal Bank of Scotland’s support for oil and gas extraction projects, and a transition of this support to renewable energy. Phase three will support post-16 students to massively increase action on the campaign in the 2008-09 academic year.  By continuing to target RBS the aim is to influence the lending practices of the whole banking sector.

“People & Planet is excited to be gearing up for a second year of campaigning to end RBS funding of fossil fuel projects. We are delighted to be supported by APE in this project, enabling us to build mass support for the campaign among young people and really increase the pressure on RBS.” People & Planet