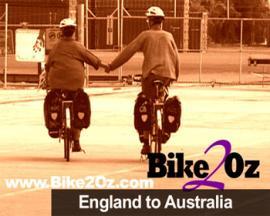 Undercurrents is an award-winning charity which produces and distributes videos reflecting the UK and global counter-culture. Established in 1993 it offers support and training to groups and individuals for social and environmental change and works with activists marginalised or overlooked by TV broadcasters. It has been very successful at distributing activist videos, DVDs and is about to launch its own internet IPTV channel, VisiononTV.

Bike 2Oz is a 16-part online video series, a booklet and a DVD exploring the links between aviation and climate change, and offers alternative methods of travelling abroad.

The video series follows a couple that chose to cycle from England to Australia rather than damage the climate by flying. All 16 episodes are available for free online viewing by streaming via www.bike2oz.com. Viewers are invited to join others in making an online pledge not to fly within Europe.

The video series has built up an online audience of more than 80,000 and has been featured by Travel websites such as Lonely Planet. In July 2009, a 15-minute compilation of the online episodes was released on DVD and distributed across the world.  Movie versions of these episodes were made for festival and cinema showings, including Portobello Film Festival and the International Community Film Festival and BeyondTv International Film Festival. The movie won a prize for best documentary in the Tokyo Video Festival 2009.