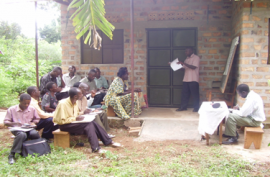 The project has effectively addressed the problems of Nakisunga in Uganda that has experienced serious deforestation, primarily as a result of household use of wood and charcoal for fuel, as well as land clearing for agricultural expansion. In addition, the use of wood as the predominant source of fuel for the rural population (95.8% of the total population) in Nakisunga who use firewood and charcoal for cooking, puts a lot of pressure on trees. While demand for wood in Nakisunga keeps rising, wood supplies are becoming limited. Since less than 5 per cent of the population has access to electricity, firewood and charcoal is used to meet the greater part of domestic energy demand. Although some rural electrification has been achieved, the overall situation remains one of unfulfilled expectations due to limited resources. Additionally, due to the population growth of about 3.4% annually, demand for fuel is increasing by more than 12% annually in Mukono District (according to environmentalists in Mukono).

Making Biomass BriquettesThe project goal has been to promote and provide an alternative and sustainable energy source of biomass briquettes to the to the villages and towns of Nakisunga to substitute the commonly used fuel wood.

The trials this project has uncovered has been huge demand for the project to the entire Subcounty by the community and leaders without considering budgetary constraints. This was in addition to hyper inflation in Uganda which affected our project implementation.

The project has achieved the following;