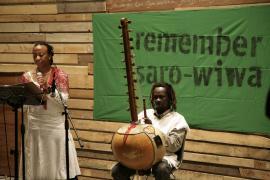 An 8-week series of ‘Carbon Occupation’ happenings based on the ‘C-Words’: Carbon, Climate, Capital, Culture

When the Director of Arnolfini invited PLATFORM to come to Arnolfini Contemporary Arts Centre in Bristol and “do our work”,  we responded with a proposal to fill the galleries with our networks, our current concerns, and to commission new work from seven collaborative artist-activist groups to stimulate new thinking and action. These were African Writers Abroad, Ackroyd & Harvey, Hollington & Kyprianou with Spinwatch, Institute for the Art & Practice of Dissent at Home, Laboratory of Insurrectionary Imagination, Trapese Collective and Virtual Migrants.

C Words brought together artists, campaigners, activists and the general public to open a critique of how race, power, and climate change interact; and to promote creative activism on climate justice in light of mobilisations for COP 15. It aimed to listen to artists, activists and those whose insights are often overlooked in European-dominated “high-concept” contemporary art contexts and to give them a platform. This included activists and artists from Bolivia, Chile, Jamaica, Canadian First Nations, Nigeria, Bangladesh, as well as the particular testimony and interpretation brought by two of the commissioned groups: African Writers Abroad and Virtual Migrants. UK activists and campaigners who contributed included Camp for Climate Action, new economics foundation, Carbon Trade Watch, FERN, The Corner House, Leigh Day (Lawyers), Sustrans, Spinwatch, Stakeholder Democracy Network, Indigenous Environmental Network, New Internationalist.

C Words was plural: it had no intention of being a neat, tidied up experience, trying to state one message or one manifesto overarchingly. It was an experimental social space embedded in a gallery, and it worked best for people who participated in the events and for artists, activists and other people in Bristol and the region who came repeatedly, and for whom the season built momentum. Many new relationships were made.

This creative hubbub and sense of action was the art-activist contribution C Words made to the field of art and climate change. A real sense of multiple social movements was created in public; how collaborations work, how difference is negotiated, and consensus is reached.  It stands out from other “static” art and climate exhibitions for this reason. It certainly wasn’t always easy for us or for Arnolfini’s staff, and there was a lot of muttering from the ‘art world’ in terms of “Is this art?” We are very grateful to Arnolfini for the opportunity, and for rising to the challenge.

Here are two poems from C Words, published in ‘No Condition Is Permanent’ a book of 19 poets on climate justice and change (available from www.platformlondon.org at £4.00):

“I tell you, it sucks. It’s a freaking waste-
land. Just shitloads of birds we’re not allowed
to shoot. Food’s okay and there’s a work-out
room, but it’s still a real bitch being based
here.”  “It’s awesome. I was, like – wow – amazed
when I first saw that giant pipeline. Proud
too – these fields are the world’s cleanest, no doubt
about it, Jesus our Lord God be praised.”
Two thousand men work here and hundreds more
come to leer at all the rigs, airports, drills,
roads, wells, waste pits, and power plants which gore
the tundra, licking their lips as black blood spills.
The boss, it’s clear, has big tumescent plans
to pump it dead with his plump, slickered hands.

You Could Lose Everything

The impacts of C Words are still unfolding in different and unexpected ways. A long-term approach is a consideration when trying to evaluate a social project of this nature.