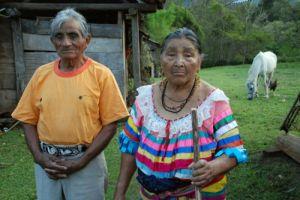 On March 16th, the Global Justice Ecology Project sent a team to Chiapas, Mexico to investigate the impacts of a California-Chiapas climate deal that relies on carbon offsets. We partnered with Indigenous organizers, human rights groups, researchers, journalists, activists, and local indigenous videographers to document and expose the social and ecological impacts of this unjust climate scheme. We travelled to remote locations around the state of Chiapas and interviewed affected communities, investigated coercive displacement and landgrabs associated with the Sustainable Rural Cities Program, and recorded the destruction caused by industrial oil palm plantations. Our investigation includes video and audio recordings as well as still photos.

The Global Justice Ecology Project team of Orin Langelle and Jeff Conant were the first international journalists/activists to conduct interviews with Zapatista community leaders in more than two years; the first to draw out the links in Chiapas between climate policy and landgrabs; and the first to challenge this climate agreement based upon on-the-ground investigation and testimonies from affected communities.

We are now following up this trip by meeting with environmental justice and climate justice organizations from impacted communities in California, in order to share what we found in Chiapas. We will collaborate on strategies to use that information to contribute to the effort to defeat the unjust aspects of California’s AB32 Climate Bill—in particular the provisions that allow California corporations to avoid reducing pollution by purchasing carbon offsets from equally unjust projects in Chiapas.

We will also publish articles, photo essays, videos, audio interviews and a report on our findings. These will be translated into English and Spanish and widely distributed in California, Chiapas and internationally. The findings and outcomes of our investigation will also be released at the UN Climate Convention COP17 in Durban,South Africa thorugh an official side event, a press conference and a presentation to the international NGO and IPO communities at a workshop at the alternative venue in Durban.

By using widespread media coverage to expose the problems with carbon offsets through our documentation of the impacts of the California-Chiapas REDD agreement, we will mobilize public awareness and action around the broader concerns of climate justice and false market-based solutions to climate change, not just in California and Chiapas, but throughout the United States. Given the key role of the US in the global climate negotiations in pushing carbon offsets as a means to avoid their responsibility to cut their lion’s share of emissions, this is a critically important objective. Click here to read a photo essay from the Chiapas investigation. Click here to read a revealing article about the treatment of Indigenous peoples in Chiapas under the guise of sustainable development.

We have extensively produced and distributed articles, photo essays, and video and audio based on our findings from Chiapas.  We have written feature articles for Z Magazine, Earth Island Journal, and Race, Poverty and the Environment; and have produced photo essays and other material for these blogs: Alternet.org, UpsideDownWorld.org, Climate-Connections.org, Race, Poverty and the Environment and Common Dreams. (see complete list below) In addition, La Jornada (Mexico’s largest left daily newspaper) covered our findings in Chiapas. We also have an ongoing partnership with KPFK Los Angeles (Pacifica radio station), providing them with interviewees every week; and daily during major climate events.  They have provided ongoing coverage of the situation in Chiapas and the climate legislation in California.

Links to the work we have published so far:

A Broken Bridge to the Jungle: The California-Chiapas Climate Agreement Opens Old Wounds

Chiapas, Mexico: From Living in the jungle to ‘existing’ in “little houses made of ticky-tacky…”

Apartheid Housing Posed as Solution to Climate Vulnerability in Chiapas

Statement from Chiapas Villagers to California Air Resources Board: “We say NO to REDD plus”

Action Alert and Video:  Village in Chiapas Starved of Medical Services for REDD

In this video, villagers from Amador Hernández, inside the Montes Azules Biosphere Reserve in the Lacandon Jungle of Chiapas, Mexico describe an ongoing threat to their land as a result of the state government’s pursuit of a climate change policy to “protect” the forest.  The action alert calls on people to submit comments to California’s Air Resources Board to reject carbon offsets.

In addition to this public education and mobilization work, we are collaborating with and mobilizing environmental and climate justice organizations in California including Communities for a Better Environment, Movement Generation (builds power among environmental justice organizations), Youth 4 Climate Justice (youth of color working for climate justice), and the National Network for Immigrant and Refugee Rights (which exposes the links between climate change and migration). Internationally, we work with Global Forest Coalition, Carbon Trade Watch and World Rainforest Movement.

The impact of our work has been tremendous; far exceeding our expectations. The video on REDD we produced, A Darker Shade of Green: REDD Alert and the Future of Forests (in English, Spanish and Portuguese) has continued to produce positive benefits for the international campaign against REDD.  Because it documents Indigenous Peoples’ powerful resistance against REDD, and has been shown at crucial international for a such as the UN Climate Conferences and at Rio+20, it has effectively countered World Bank and UN propaganda that Indigenous Peoples embrace REDD.  This has greatly undermined support for REDD and there has been no ability of the UN to advance consensus on a multilateral REDD program.  It has instead moved into the subnational and private sector, where smaller REDD projects, such as those depicted in the video, are being developed.

Here, too, our work has had lasting impact as the communities we interviewed in the video have taken the research and information they have compiled on REDD with our assistance and are using it to organize in their own community and in neighboring communities, making it extremely difficult for the governments of Chiapas or Acre to move forward.  This, in turn, is feeding the opposition campaign to REDD in California.

Click here to view the 3 minute trailer of the video:

REDD Organizing at the UNFCCC COP-17 in Durban, South Africa:

Global Justice Ecology Project also supported both the mobilizing efforts around REDD by our Indigenous partners at COP-17 in Durban, South Africa. We helped edit and distribute the Indigenous Peoples’ call for a moratorium on REDD in Durban, which was a focal point of Indigenous organizing against REDD in Durban and received significant media attention. In preparation for the Durban Climate COP, GJEP produced “The No REDD Papers, Volume I”, an 80 page compilation of writings and graphics against REDD.  Nearly all of the 1,000 copies produced were distributed in Durban.

Along with Global Forest Coalition and Indigenous Environmental Network, GJEP co-organized a Future of Forests Strategy Meeting at the University of KwaZulu Natal. REDD was a key focus of discussion at the event, which included participation by representatives from communities threatened by the impacts of REDD in both the Global South and the Global North.

This grant from APE-UK is very important because there are few funders who will support work to expose the social costs of market-based carbon offset schemes. This grant will enable us to elevate the concerns of the Indigenous communities in Chiapas with whom we are partnering regarding the social impacts of these schemes. It will also enable us to bridge the gap between these communities and communities in California that are experiencing the toxic impacts of pollution – pollution being allowed because of the offset programs being opposed in Chiapas. It is a great opportunity to build climate justice solidarity on both sides of the US-Mexico border and defeat these unjust climate mitigation schemes.

IMPACTS OF AGROCHEMICALS ON CLIMATE CHANGE