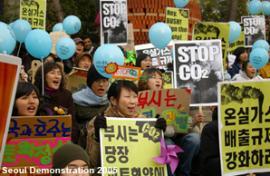 The Campaign Against Climate Change aims, quite simply, to mobilise the greatest number of people possible – both nationally and internationally – to put pressure on world leaders to take the necessary action for an effective and equitable emissions reductions treaty, with appropriate mandatory targets for all the nations of the world. To this end they organise ‘Global Climate Demonstrations’ – that are synchronised all around the world at the time of international Climate Talks.

On April 6th 2007, there is a planned demonstration at Exxon Mobil HQ, drawing attention to their covert efforts to undermine a workable climate treaty. A Climate Conference is also planned in collaboration with London School of Economics in May.

“With APE’s grant, Campaign against Climate Change will be able to realise the potential more fully of the unique position it has established for itself on both the national and international climate campaigning scene.”