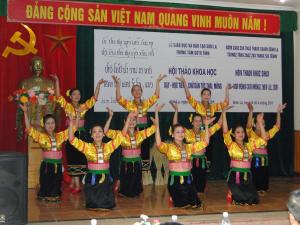 A pioneer project for the Vietnamese-Thai Indigenous Network

It aims to build the capacity and strengthen the cooperation of VTIK network members in issues regarding Climate Change/REDD so they can assist other Ethnic Minority groups and communities in six northern mountainous provinces of Vietnam for effective participation and response to Climate Change adaptation and mitigation. The project will be implemented through a series of awareness-raising and capability-building activities and the establishment of a pilot model on generating news and media coverage based on Ethnic Minority Cultural presentations, CD and DVD reproductions and culminating with a Cultural Theatre Art Workshop for Climate Change by Ethnic Minority artists.

These series of activities brought about by the project will create and play major role into Ethnic Minorities efforts for community-based forest protection/management and sustainability. The project will start in June, 2011 and is expected to end in June 2013. This will be implemented by the CSDM (Centre for Sustainable Development in Mountainous areas) in close collaboration with the VTIK network members. CSDM is a local development organization in Vietnam and was established in 1998 with a vision of ensuring all disadvantaged people and Ethnic Minorities are able to realize their rights, enjoy the best quality of life, preserve the rich cultural heritage and have a sense of pride and dignity being a distinct people, empowered, capable and self-reliant in all aspects of their lives. True to its vision, CSDM focused on programmes and projects intervention related to Climate Change mitigation and adaptation, sustainable management of natural resources, protection and promotion of Indigenous People’s Rights (their identity and human rights of ethnic minorities as a distinct people), community capability development, sustainable livelihood, grassroots democracy and good governance.

CSDM was able to implement the following activities on Capacity-Building on Climate Change with the VTIK network association, its leaders and members in the 8 provincial formations of northern Vietnam. These Capacity-Building activities include 2 Community-Based Trainings-Workshop and 1 training-workshop held in Hanoi City, Vietnam.

1.   The 2 Community-Based Training-Workshop on Climate Change and REDD in Son La and Nghe An provinces

a.   The training/workshop on Climate Change/REDD, Forest Protection and Management was conducted September 8-10, 2011 at CCE, Son La City, Son La, Vietnam. There were 40 participants (21 males; 19 females) coming from the VTIK network members and with expanded participants coming from the officials of CCE (Community Continuing Education) Son La, faculty and teachers of Teacher’s Training College of Son la and representatives from the Department of Natural Resources of Son La province.

b.   The training/workshop on Climate Change/REDD, Forest Protection and Management was conducted October 8-10, 2011 at CCE Nghe An province, Vietnam. There were 65 (45 males and 20 females) participants coming the VTIK network members and expanded participants coming from the officials of CCE (Community Continuing Education) Nghe An and representatives from the Department of Natural Resources of Nghe An province.

The following courses and topics were presented and discussed in the 2 community trainings are as follows:

Results and Impacts of the 2 training/workshop:

The topics were discussed are the following:

The participants agreed to the following:

a.   Intensify the propagation activities on Climate Change in Communities

b.   Promote forest protection and development

c.    Promote and restore the values of sacred forests protection

d.   Regulate the use and exploitation of forest and land  resources  and mining operations and activities

e.   Establish the link from national to local levels in the recognition, promotion and implementation of customary laws in forest protection and use.

f.     Development of  community regulations on the right to use and management of community forests as an obligatory condition for effective forest protection and ensure active REDD participation

g.   Support ethnic communities on forest protection  mechanisms,  like household’s assignment and management of forest productivity in accordance to law, integration and recognition of traditional cultures and beliefs in the development of village regulations, free, prior informed  consent and consultation with the community whenever there is development programs and projects  related to forests and land, reforestation of indigenous trees should be given priority instead of commercial trees, government assistance and subsidy to construct concrete houses for ethnic peoples by giving construction materials and the control and regulations of protection, promotion and exploitation of herbal/medicines plants and trees.

h.   REDD programs and concerns should not only limit to forest protection but also include all living creatures living with forests and bio-diversity. Thus, there is a need  to make people know especially ethnic people who are forest  dwelling and dependent about REDD so that they can live in harmony with nature and environment.

On behalf of the entire Ethnic Minorities in Vietnam and the VTIK (Vietnamese- Thai network for Indigenous Knowledge) we in CSDM serving as the coordinating centre are very grateful for the APE funds. This project will really make a difference most especially for the advancement of the Ethnic Minorities welfare, interests and social developments. Climate Change/REDD are really hot issues of the day in Vietnam, through this project the VTIK and the Ethnic Minorities will be prepared to any possible engagements in the future. Although, this is a pioneering project for VTIK rest assured this will bring meaningful outcomes. The funds that you have entrusted with us will not be in vain, as this will be a great help for the VTIK and the entire Ethnic Minorities in Vietnam. Knowing the limitations of the funds, CSDM and VTIK will maximize all the opportunities and resources available to implement the project as stipulated in the proposal. Creativity and discipline will be the guiding principles in maximizing the funds to really serve its main purpose. Once again, we want to express our deepest gratitude for APE for the unyielding support given us. We will do our very best for the success of the project. This noble endeavour will always remain and linger in the hearts and minds of the Vietnamese-Thai and other Ethnic Minority groups in Vietnam. Again, a million thanks for the support! Sincerely yours, SGD. Mrs.Luong Thi Truong Director Centre for Sustainable Development in Mountainous areas (CSDM)