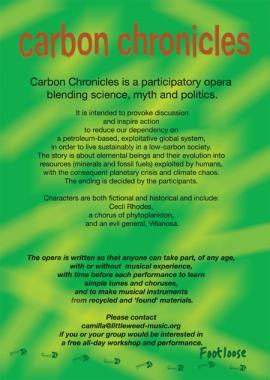 Metaphorical storytelling where the ending is up to us all

Carbon Chronicles is a participatory opera blending science, myth and politics. It is intended to provoke discussion and inspire action to reduce our dependency on a petroleum-based, exploitative global system, in order to live sustainably in a low-carbon society. The story is about elemental beings and their evolution into resources (minerals and fossil fuels) exploited by humans, with the consequent planetary crisis and climate chaos. The ending is decided by the participants.

The opera is written so that anyone at any age can take part, even without prior musical experience, with time before each performance to learn simple tunes and choruses, and to make musical instruments from recycled and ‘found’ materials. A small core group will tour the piece around Britain and Ireland, collaborating with the transition town network and other groups, and working with local musicians. A national gathering in 2010 will bring together all participating groups to recreate a grand story of our times.

Footloose is delighted to have a grant from APE to develop ‘Carbon Chronicles’. We are giving workshops based on the opera Carbon Chronicles with different groups, mainly drawn from the Transition Town network. The opera follows carbon from its origins in the stars to its central role today, while also looking at the industrialisation, colonialism and exploitation of the Earth which has led to our current crisis of global warming and all the associated environmental and social impacts. Footloose is a collective of artists who come together to work with many different groups in community settings, often out of doors, or on environmental themes. We also produced ‘Soya Susie and the Gene Dictators’ about genetic engineering. We intend to create a national network of Carbon Chroniclers, to play music together and share ideas and collaborate on creating culture that is community based and low in carbon emissions.”