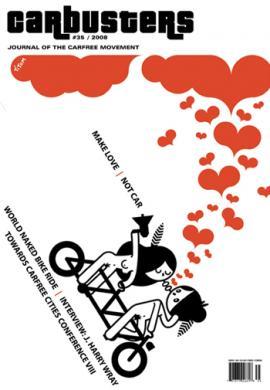 Beyond the tyranny of the automobile

The World Carfree Network (WCNE) grew out of the activities of Carbusters, an international organisation within the carfree movement founded in 1997. It co-ordinates the international Towards Carfree Cities Conference annually. The goal of the conference series is to bring together people from around the world who are promoting practical alternatives to car dependence and ultimately the transformation of cities, towns and villages into human-scaled environments rich in public space and community life.

In 2007, Carbusters became a self-sustaining project and began working with the Non-profit Enterprise and Self-Sustainability Team (NESsT) to access the magazine’s potential to become a profitable enterprise that can fund the work of WCNE.  The aim is to promote the expansion of Carbusters with the Carbusters online project which should meet both WCNE primary goal of nurturing current carfree activists, attracting new ones and promoting carfree lifestyles and towards the secondary goal of increasing the profitability for the organization’s activities and operations.