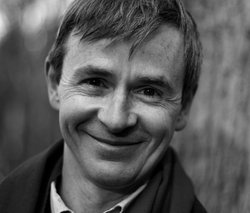 Following a period assisting on documentary films in the United States in 1987 and 1988, Caspar Henderson worked in Uganda on aid projects, becoming a specialist in environment, development and human rights. From 1992 to 1994 he was the first coordinator of the Green College Centre for Environmental Policy and Understanding at Oxford University. The Centre worked to bridge the gap between science and politics on climate change, biodiversity and related issues.

In 1995 and 1996 he was a producer and reporter for Costing the Earth, the flagship environment programme on BBC Radio 4 (a UK national network). From 1996 to 2002 Caspar wrote, broadcast and edited articles and stories about energy, environment and human rights. He worked for The Financial Times, The Independent, New Scientist, The New Statesman, The Ecologist, Environmental Finance, Green Futures (as senior correspondent), BBC World Service Radio and others. In 1999 he won an IUCN-Reuters award for best environmental writing in western and central Europe.

Also from 1996 to 2002 he was also an occasional consultant, analyst and advisor for governmental, commercial and non-profit organizations including: The European Commission, The Environment Select Committee of the House of Commons, BP, Anglian Water, Oxfam and Greenpeace. From 2002 to 2005 he was globalization editor of openDemocracy.net, a project for open global politics, where he commissioned, edited and contributed to analysis and debate on a wide range issues. In 2005 he conceived, organized and edited a global online debate on the politics of climate change, working with prominent scientists, authors and artists from more than a dozen countries.

Caspar has worked as a trainer and speaker with the BBC, the British Council and other organizations in the UK, the US, Poland, Ireland and Malaysia. His recent books include : Debating Globalization (Polity, 2005), and Fragile Earth: the Beauty of a Planet under Pressure (New Internationalist, 2005).

At present he is writing a book on the future of the world’s coral reefs. He is also commissioning and editing a special on UK climate and energy policy for New Statesman magazine, and preparing a blog on nuclear power for the Institute of Physics. He continues to contribute to other publications internationally and to speak internationally. He is Director of Grains of Sand Ltd, a communications company. He writes two blogs: Grains of Sand and Coral Bones.

Caspar Henderson has an MA from Cambridge University. He speaks some Spanish, French and German. He is a British subject but would prefer to be a British citizen.