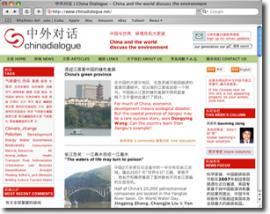 Chinadialogue.net features a daily bilingual news service, regular columns from some of China’s most distinguished environmental journalists and a range of non-Chinese authors writing in-depth on issues that range from food security to urbanisation and biodiversity. Climate change is certain to be the most urgent topic of the decades ahead, and China will be at the centre of the debate , as China fast overtakes the US as the world’s largest emitter of carbon dioxide. As such, the Chinese people’s relationship with their government – and the country’s relationship with the rest of the world – becomes paramount; ultimately, it may determine if the world can develop sustainably.

‘Our Generation, Our Planet’ is a bilingual project aimed at young people in China and the English-speaking worlds (aged 14 to 25) that will raise awareness of climate change and promote action. This will be achieved by publishing articles on the internet from young people inside and outside of China on personal consumption and its relation to climate change , and by hosting l i ve web chats with ‘youth heroes’ on sustainable consumption and other climate change topics. There will also be a twin project between a school in the UK and a school in China, where participants will look at what would happen to their community as a result of climate change, plus essay and photo competitions, and a bilingual, participatory online guide to sustainable living.

Chinadialogue.net is a fully-bilingual Chinese and English discussion site, with full translation of participatory contributions.

“Just writing to share with you the excellent news that Isabel has been honoured for her work with chinadialogue and has received an OBE. I’d like to relay her sincere thanks to for your valued support over the last three years. chinadialogue relies on its network of funders, advisors, partners and contributors. Without you this wouldn’t have been possible.” China Dialogue