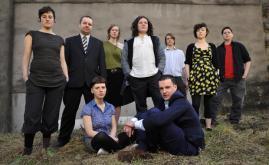 The Climate 9 Defence Committee are a wide group of organisations and individuals who support the actions of anti-aviation campaigners associated with the Plane Stupid Network who take direct action against airport expansion.

We encourage others to build strong climate change campaigns to highlight the role of the legal system for environmental justice. This will be through creating resources available through the website, workshops, video and hard materials launched in 2011.

Background: The trial of the activists recently took place at Aberdeen Sheriff Court and was the first climate change jury trial in Scotland, the biggest in the UK since the failure of the Copenhagen climate summit and it brought global public attention on the need for action to prevent runaway climate change.

Aims: Promoting collective direct action and supporting those taking action through creating a range of resources. The committee is producing educational materials in the form of:

1. A pamphlet with all the supporting statements generated throughout the trial showing the connections between the environmental issues – from fuel poverty & public health through to climate change;

2. A short film documenting the process of how ordinary people can challenge the legal system for environmental justice;

3. A book documenting the process.

The legal book, in collaboration with human rights lawyers and volunteers, will be a resource for legal professionals, defendants, individuals and groups considering action. The film will be used as a learning tool for activists, individuals, groups and to help spread the message about the need for action.

1. Building support for those willing to challenge climate change criminals in court, by sharing what we have learnt and how to build global support. During the trial the Climate9 received support from multiple varied organisations including leading anti racist groups (The Monitoring Group), pioneering environmental justice groups (Capacity Global), world leaders in community environmental governance (The Gaia Foundation), top spiritual bodies (The Muslim Council of Scotland, Churches politicians eg. Caroline Lucas, NGO’s (Friends of the Earth Scotland and Stop Climate Chaos Scotland), musicians (Linton Kwesi Johnson), journalists (John Pilger) and many more. The resources will be shared for these groups and others.

3. Promoting collective direct action and supporting those taking action. We strive to promote the message, through creative communications materials and forums, that groups engaging in civil disobedience for climate action act in a time of urgency to protect a planet in danger. For us, the process is as important as the outcome. People from all kinds of backgrounds using all kinds of methods will continue to be involved, including film makers using participatory video-activist tools, journalists, legal and human rights organizations, artists creating socially-engaged paintings to bring the issues to life, and many more.

Climate9 2011 What’s Next? The Film Series – lessons for organising – ‘How ordinary people take on the State for environmental justice’.

You may remember the recent Climate9 trial that took place at Aberdeen Sheriff Court, which was the first climate change jury trial in Scotland and the biggest in the UK since the failure of Copenhagen. It brought global public attention on the need for action to prevent runaway climate change. The actions of the Climate9 drew attention to the damage which would have been perpetrated, had they not stopped at least 107 tonnes of carbon from being emitted (enough to heat 200 Scottish homes for a month) during the 5 hour occupation. Aviation is the fastest growing source of global CO2 emissions and 60% of flights from Scottish airports are internal. So we still have work to do!

In light of all the interest raised and all the subsequent climate change trials (see the inspiring Manchester Plane Stupid trial), the Climate9 defence committee are producing a short film series:

How Ordinary People Take on the State for Environmental Justice – a creative and powerful online video series of six short films documenting the process of how ordinary people can challenge the legal system for environmental justice. The films will be used as learning tools for activists, individuals and groups to help spread the message about the need for action. They will be promoted on the website with all the supporting statements generated throughout the trial, showing the connections between the environmental issues and wild law – from fuel poverty to public health to climate change.

Members of the Climate9 defence committee have been, and will continue to, hold popular education workshops to build on lessons learnt from organising political trials for social change. At these events and in the media we connect themes such as police oppression, climate change, social, ecological and intergenerational justice and fuel poverty to support people to get to the root causes of social and environmental injustice.