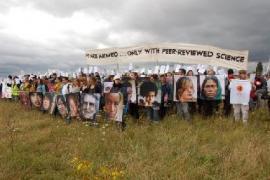 Through this combination of experiences the aim is to inspire and motivate participants to take more effective action against the route causes of climate change. The camp will take place near Heathrow airport – despite British Airways Authority’s attempts to ban the camp – in order to highlight the role of aviation as the fastest growing source of carbon emissions.

Organisers of the camp believe that the plans for aviation expansion make a mockery of all the other work that is being undertaken to reduce greenhouse-gas emissions. They aim to halt plans for a third runway by raising awareness of the issues with the local community and by invigorating the growing network of people taking collective action against climate chaos.

STOP PRESS On 11th October 2009 the airport operator BAA bowed to opposition to a third runway at Heathrow airport. It will not now submit a planning application before the UK general election and will not sign large contracts to ‘bounce’ a future Conservative government into accepting it. For more details: http://www.timesonline.co.uk/tol/news/uk/article6869676.ece