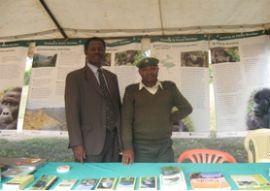 The Ugandan Wildlife Society (UWS) was established in 1998 and is a membership based, non-government organisation engaged in environmental policy research, advocacy, education and awareness. Its mission is to promote the conservation of wildlife and the environment. UWS develops, implements and supports field-based conservation projects that are aimed at involving local communities in the management and conservation of vital ecosystems.

UWS implemented a project “Promoting Capacity to Adapt to Climate change among communities of Pallisa and Kanungu Districts”  for a period of four months from 1st April to  31st July 2010 with support from APE.  The project aim was to enhance the community based organisations and people’s capacity to adapt to impacts of climate change in Kanungu District.

The project‘s specific objectives were;

The following activities were carried out:

The success of this project in Kanungu did not come without challenges:

We wish to thank APE very much for the trust invested in us out of the multitude of applications to give us support to implement this project. This financial aid will give us an opportunity to make the public understand the dangers of climate change and to prepare them to handle climate change effects.