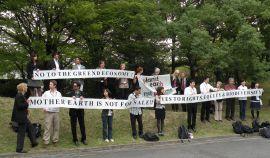 Exposing the impacts of climate change on agriculture and biodiversity

Following the recent financial crisis and the decision to spend vast sums of public money to bail out the banking sector, governments now have little money or will to tackle climate change and its impact on agriculture and biodiversity loss. 2010 is the UN’s Year of Biodiversity, yet publication of the third Global Biodiversity Outlook paints a bleak picture: “The action taken over the next two decades will determine whether the relatively stable environmental conditions on which human civilisation has depended for the last 10,000 years will continue beyond this century. If we fail to use this opportunity, many ecosystems on the planet will move into new, unprecedented states in which the capacity to provide for the needs of present and future generations is highly uncertain.”

Obviously, a major cause of these problems is global warming, increased extremes of weather and the destruction of ecosystems. However, instead of agreeing to tackle these issues, most governments are trying to evade them, often with vague talk of ‘market mechanisms’ with which to address them. There is a lot of distrust and unwillingness to make real commitments to reduce emissions and change from an energy-intensive model of development based on perpetual growth. Urgent action is crucial, but it must be the right action:

“Human history and recent studies suggest that our actions to cope with climate change (adaptation) or lessen its rate and magnitude (mitigation) could have impacts that match—and even exceed—the direct effects of climate change on ecosystems.” (Climate Change: helping nature survive the human response by Will R. Turner, et al. 2010)

In preparation for the crucial negotiations at the conference of the parties in Nagoya in October 2010, members of the Econexus team attended 2 sets of meetings of the CBD, both in Nairobi totalling 3 weeks: the Scientific and Technical meeting (SBSTTA) and the Implementation of Work Review meeting (WGRI), where we became concerned about the influence of market thinking on biodiversity and a number of other worrying developments. We held a side event, wrote several articles for the ECO magazine (produced during the conference) and also prepared interventions to the negotiations from civil society. In addition, we made and re-established good relationships with government delegates from a number of countries.

We also attended the three sets of climate talks held in 2010, for a total of three and a half weeks. Here we held two side events and distributed materials to delegates and civil society from our exhibits. We also discussed issues with key negotiators.

Priorities for both tracks

A major activity at these meetings was to monitor the side events and activities of other participants, eg: the proposed extension of carbon markets to cover a wider range of areas; the increasing interest of business to profit from markets related to climate change; proposals to introduce ‘biodiversity offsets’ and potentially a ‘green development mechanism’ and the implications for biodiversity, climate change and land use.

We will continue this work in Nagoya in the following ways:

Papers produced since the beginning of 2010 (see www.econexus.info)

Agriculture and Soils in Carbon Trading: briefing for climate talks

In preparation: papers on climate, biodiversity and markets and biorefineries

We are delighted to receive this grant. Reaction to our work shows that we are filling important gaps in discussions about agriculture and climate change, especially some of the proposed solutions: agrofuels, biochar, GM crops and trees, livestock intensification – none of these will actually provide what we need. There are no quick fixes. Instead we must look after the biodiversity and ecosystems, the soils and water supplies that underpin our lives. So many of us are now living in cities so it is easy to forget what food production means and as a result, we are in danger of seriously undermining the planet’s balanced support systems. But we are still just in time, and must take concerted action to protect biodiversity and reduce human pressure on ecosystems.