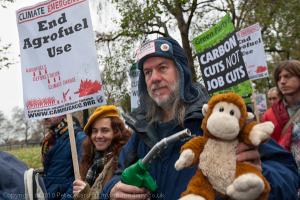 Supporting local campaigns against biofuel and biomass power stations in the UK.

Biofuels and bioenergy worsen climate change, threaten forests, biodiversity and human health, and encourage land grabs – but many people think that because they are labelled as ‘bio’ – they are sustainable. Biofuelwatch puts paid to this myth and exposes the loopholes and greenwash inherent in much current policy-making. Industry and governments, under the guise of addressing climate change, have provided support and massive subsidies  to promote the use of living plants – wood, crops, grasses, algae, etc) as a substitute for fossil fuels. They promote refining these materials into biofuels for transportation (agrofuels), as well as biochemicals/plastics and other “bioproducts” and burning them for bioelectricity.

Where will it all come from? This ENORMOUS demand for crops, wood and other forms of “biomass” is resulting in expanding industrial monocultures, more GMO crops and trees, deforestation and “land grabs” as investors cash in on these profitable new markets.

Bioelectricity: Burning wood for “renewable electricity” is very rapidly expanding and accounts for the bulk of growth in renewable energy in Europe and the US. The result: massive new demand and international trade in woodchips and pellets, which are shipped all over the world to be burned. Burning wood for electricity is inefficient (most facilities operate around 25% efficiency, and require about 13,000 tons of wood per megawatt/yr of electricity generated), releases more CO2 per unit of energy even than burning coal or natural gas. The “carbon neutral” claim – that trees will regrow and re-absorb carbon released when they are burned is misleading: Trees can be burned in minutes, and yet take decades to regrow. Meanwhile we will dump more, not less CO2 into the atmsphere. Overharvesting depletes nutrients and inhibits regrowth.

Biofuels including corn and sugar cane ethanol, soy and palm oil biodiesel, continue to expand, in spite of numerous studies demonstrating their failure to reduce emissions, the negative impacts on biodiversity and human rights, and their role in worsening hunger. Al Gore recently pronounced his support for ethanol as a “huge mistake”. Yet now the US military is promoting the use of various biofuels for “energy security” – the US military is the largest single consumer of oil on the planet.

Biochar (fine grained charcoal made from burning biomass), is being promoted as an offset for pollution, for example to “offset” the emissions from Canadian tar sands extraction, and also as a “climate geoengineering” technology. Yet there is little basis for assuming that biochar will provide any of the claimed benefits, and good reason to assume that massive new demand for plant material will worsen problems. Proponents have called for more than 550 million hectares of land to be converted to produce feedstock for biochar production. Whose land? Land grabs and human rights violations are already underway as investors seek to profit from these new markets.

We have provided active support to biomass campaign groups in Trafford (Greater Manchester), North Blyth (Northumberland), Tyneside, Isle of Wight; Leith (Edinburgh) and Grangemouth (Fife) and Llangefni (Anglesey) and we have also provided information and support to a group in the Basque country.  This work has included:

We set up a new ‘Biomass Action Network’ email list for campaigners opposed to industrial biomass power stations and the subsidies behind them, so far over 50 members from the UK, Spain, Denmark and Italy.  This allows for the sharing of information and campaign experience between campaigners many of whom would otherwise have been working in isolation and with little or no support.  In the UK, we have established closer links with and between local biomass campaigners.

Biofuelwatch’s UK-wide campaign priority in recent months has been on Government proposals for long term renewable electricity subsidies, including subsidies (Renewable Obligation Certificates or ROCs) for biomass and biofuel electricity.  The UK proposal foresees unlimited biomass electricity subsidies which have already resulted in industry proposals for power stations which will burn about six times as much wood every year as the UK produces annual, as well as subsidies for biofuel (likely palm oil) electricity.  Our campaign has focussed on highlighting the serious impacts which such a large and unsustainable new demand will have on climate change, forests and people, as well as the need to shift support towards genuinely renewable and sustainable energy and energy efficiency, including home insulation.  Key events have been:

–        A well-attended Public Meeting on ROCs in London during October, organised by Biofuelwatch, where our biomass campaigner  presented alongside a speaker from ActionAid Tanzania and the Friends of the Earth agrofuel campaigner. Presentations of the event can be accessed at www.biofuelwatch.org.uk/2011/presentations-4th-october-2011/

–        A national protest outside the Department for Energy and Climate Change in London, on 22 October. This was attended by campaigners from the Isle of Wight, Trafford, Bristol, Brighton, Eastbourne, Port Talbot, Newport (Wales), Portland (Dorset), Southampton and Edinburgh as well as London. As well as a protest this also proved to be a good networking opportunity for campaigners from across the country working on the issues surrounding large bioenergy power stations and it helped bring together biofuel and biomass campaigners. Coverage can be found at http://london.indymedia.org/articles/10619

–        Providing in-depth resources with background about the Government consultation in England/Wales and in Scotland, guides for MPs and MSPs, briefing notes for groups wishing to respond to the consultations, and related UK and Scottish cyber-actions (http://www.biofuelwatch.org.uk/uk-campaign/rocs_overview/).

–        Initiated an Open Letter against the subsidies for destructive biomass and biofuel electricity supported by 87 organisations from 25 countries (http://www.biofuelwatch.org.uk/2012/rocs_open_letter/).

–        Meetings with two local campaign groups in Scotland to deliver presentations on the implications of subsidies for bioenergy and the Government consultation.