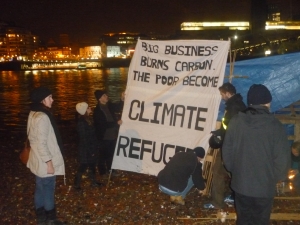 A civil society day of action – coinciding with COP17 in Duban – to raise awareness of the connection between climate change and the increasing numbers of ‘climate refugees’.

The Climate Refugee Camp was an effective way to communicate the message that climate impacts are real. The location on the desolate foreshore of the River Thames in London was quite dramatic, and the flimsy shelters we erected there gave a vivid sense of the vulnerability of climate refugees. It was also quite poignant that the camp was right in the shadow of the City of London, the financial district that drives so much of our over-consuming, over-emitting economy. It also gave us an opportunity to attract members of the nearby “Occupy London” camp at St Pauls, to spread and reinforce the climate justice message amongst Occupy activists and to forge links with them.

The camp, itself, failed to attract much in the way of attention from the broader media. The larger event, of which the camp was a part – including the Climate Justice March from nearby Blackfriars bridge to Parliament, the following day, did attract some media attention – including Sky TV, a picture on the Guardian website etc…and did manage to provide a visible manifestation of popular support for action on climate at the time of the annual UNFCCC talks in South Africa. But the camp itself, with its more specific message did not, despite some initial interest, gain much media attention.

Some of the reasons for this lay in the problems we encountered in the course of this project. Due to the Occupy protest camp that was set up at St Paul’s (ironically this was the first place we tried for our transient ‘refugee’ camp but were denied permission by the church) all the relevant authorities in London were hyper-suspicious about anything that involved a ‘camp’. Consequently it proved impossible to find a venue for an overnight camp from which the Climate Justice March could set off the following day, as we originally planned. The one place where we could not be suspected of setting up a permanent camp was the Thames foreshore which had some additional advantages of being an appropriately desolate location.

However this meant we could not actually camp through the night (without getting very wet !) so the Friday night refugee camp did not run into the following days activities with the march to Parliament etc.. but was rather detached from it. We still hoped to attract media to the camp but when media interest around the Durban Climate talks was not especially high we did not manage to attract the media to the camp as well as the Climate Justice March, the next day.

The camp itself was a very unique event for those who took part – with the chilly night wind and intermittent rain sharpening our sense of empathy for the experience of real refugees and generating a sense of shared struggle against the elements.