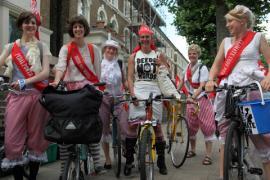 Ensuring people-participation in the climate talks in Copenhagen, December 2009

Over the course of 2009, Climate Rush will hold regular awareness-raising events focusing on the climate talks in Copenhagen in December 2009. This will be done by drawing attention to the various industries and government initiatives responsible for causing climate change using creative direct actions, music, dancing, food, art and performance. By having fun whilst making a serious point, people can be inspired to join in and get involved with accessible direct action without feeling intimidated.

Climate Rush specialise in inspiring calls to action that are designed to attract as wide a demographic as possible – thereby expanding the message that the time is now to do something about climate change. Success will come as a result of the diversity of our actions, not from a single all-embracing initiative.

“Climate Rush is thrilled to have received funding from APE. Our monthly events aim to build a mass movement to join in direct action against the biggest obstacles in the way of a just, sustainable and safe future for our planet. The money APE has given us has already helped make our events more inclusive, enabling us to hire rickshaws for non-cyclists at last month’s Pedal Power bike ride, which took protesters from a coal conference at Chatham House to an impromtu picnic on Westminster Bridge. Money for leaflets and stickers will bring awareness of events to an even wider audience, helping us to make our events reflect the broad range of people who wish to take action on climate change. The funding will also come in very handy when it comes to keeping our events colourful and creative, the most important component of our protests! We’re excited about what it will mean for the inclusivity and look of our upcoming events, which include a fête at a biofuel plant and a spectacular showdown at Parliament for the Copenhagen climate talks.” Climate Rush