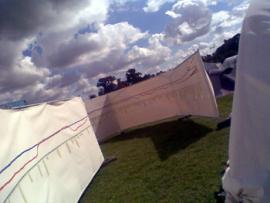 Depicting the correspondence between technological innovation and climate change

I received funding from APE to pay for the costs of producing a 25 metre long banner called Climates of Change, which mapped human social and technological developments against global average temperature and atmospheric carbon dioxide levels.

The banner had various aims:

The banner was made specifically to be shown at the 2008 Camp for Climate Action at Kingsnorth in Kent. Unfortunately, the police confiscated the banner as an ‘offensive weapon’ on its way into the Camp, and I was only able to get it back, with the help of a local councillor, after the Camp had finished. This was obviously incredibly frustrating and disappointing, but the banner was still shown at the Shambala festival and the 2008 Permaculture Convergence in Yorkshire, and it is hoped it will be shown in Copenhagen during the COP15 talks in December 2009.

The banner had an overwhelmingly positive response from the people that saw it; according to the cartoonist Polyp: “The end result banner was an astonishing piece of work. The text was fascinating, and the message unmistakably clear – one that could only have worked at the scale used.” .

“Getting the grant from APE was a great vote of confidence and timely piece of encouragement for what seemed like a somewhat overambitious project – showing human social and technological development related to changes in climate over the last 18,000 years, with a special section for the period from 320,000 BC to the end of the last Ice Age, on one huge banner. Sadly the police prevented it from being shown at the 2008 Climate Camp as originally intended, confiscating it as an “offensive weapon”, but the banner was eventually freed to be shown again.” Climates of Change Project
_________________________________________________________________