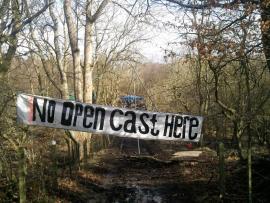 Coal Action Scotland (CAS) completed both of our projects funded by APE – the Outdoor Skill-Share and the occupation of the Black Wood Solidarity Camp in Fife, and also held an event called Communities in Resistance, bringing together communities resisting coal developments from across Scotland. In addition, CAS is currently making preparations for the imminent occupation of another open cast site.

Over a hundred people came together on the weekend of the 18th-21st June 2010 for the Outdoor Skillshare. Held at Talamh Housing Co-op in South Lanarkshire, the weekend brought people together to share the skills needed to occupy land at risk from coal-mining developments and defend it from eviction. Workshops covered varied topics including cooking for the masses, digging tunnels, radio communication and climbing trees. The weekend also had sessions on skillsharing and participatory workshops. It is hopped that more skillsharing and events of this type will happen across the UK in the future.

Lewis from Leeds who travelled up to Scotland for the weekend said: “It was a really amazing event and I learned a lot. I’d never put on a harness or cooked on a giant gas burner before so it was a great opportunity to practise these things. I really feel like all of us who came to this weekend will be able to go to a protest camp and actually chip in.”

Laura, part of the group that organised the event said: “We were surprised at the number of people who came and the atmosphere. People organised spontaneous sessions and those of us giving workshops learned new ways of doing things. It was such a great weekend and I hope we get a chance to do it again.”

The temporary camp overlooked the former site of the Mainshill Solidarity Camp, now a functioning open cast mine, and was surrounded by Broken Cross and Poniel open cast coal mines. South Lanarkshire has been blighted by open cast coal mines for decades and has also been a hive of resistance by communities and environmentalists. Over the weekend people from local communities visited the event, including some local young people who took part in the kids’ climbing workshop.

The Outdoor Skillshare was seen as a great success by those who took part, as it made accessible the skills necessary for defending land and communities from the blight of open cast coal mines

The Communities in Resistance workshop brought together communities resisting coal developments across Scotland to share skills and experiences, and strengthen the Scotland-wide campaign against new coal. The event was seen as a great success, with participants from CAAOC [Communities Against Airfield Opencast Coal], CONCH [Communities Opposed to New Coal at Hunterston], people still fighting new coal in the Douglas Valley, and activists from Coal Action Scotland, all gathered together to share skills and information and strengthen links.

The event took place in the St. Brides Centre in Douglas, South Lanarkshire, the heart of resistance to open cast coal in Scotland. The day started at 10.30am and finished at 6.30pm with a packed agenda. There was lots of useful discussion throughout, with a talk from environmental Lawyer Frances McCartney and a workshop by CONCH on different tactics for campaigning against new coal.

The Black Wood Solidarity Camp was a two-week occupation of a new 600,000 tonne open cast coal mine in Fife. UK Coal planned to mine the Blair Farm site just North of Oakley, despite much community resistance and a bundled planing process.

Although it didn’t last as long as the Mainshill occupation, the Black Wood Camp made links with communities in Fife, an area of Scotland that CAS hadn’t worked in before, and raised the profile of the issues around open cast mining in the area, to the extent that CAS has been invited to participate in debates and talks in Fife since then, and our activities are regularly quoted in Fife’s newspapers in relation to coal.

The Camp also added to pressure on UK Coal, which at the time also had one of its mines in Shropshire occupied by local communities, and is still facing fierce resistance to its plans to mine its Minorca site in Leicestershire. Subsequently, UK Coal has sold the Blair Farm site to Scottish Coal amid claims that it couldn’t afford to keep mining it. The Dunfermline Chronicle suggested that the occupation put UK Coal off mining in this area of Scotland.

Since the Black Wood Camp, CAS has been making preparations for another occupation. This has included getting materials, tools, and equipment together, arranging transport and creating publicity. We have been working with communities to determine the most appropriate timing, and have been engaging with planning processes continuously. The next occupation of an open cast coal site is expected very soon and is the only ongoing aspect of CAS projects so far.

How have you evaluated the impact of your project?

Evaluations are seen as key aspects of our projects, and were evaluated in the following ways:

An extensive de-brief and feedback session was held at the end of the Skillshare, with participants invited to share their thoughts both verbally and in written format. Questions included how inclusive participants found workshops, the organisation of the event, what participants especially liked, and suggested improvements for future events.

An extensive de-brief was also held for organisers of the event, to assess how well the event fulfilled its aims.

Before the event took place, invitations and questionnaires were sent out to community groups. The questionnaires aimed to establish what workshops and sessions would be most useful for those participating, and tried to maximise participation and usefulness from all campaigns.

At the end of the day there was a feedback session where the event was evaluated by those who participated. The main elements that came out of this were that all who participated found it had been a very valuable event where good links were made between campaigns, and much useful information and experiences were shared. All participants expressed a desire for a follow-one event, and CONCH have taken on hosting it in West Kilbride.

Following the occupation an evaluation of the camp took place between all those involved. Through the links made with local communities, the press coverage achieved and heightened awareness of the issues in the area, as well as the cost incurred by UK Coal and subsequent selling of the mine, the camp was deemed to have been a success despite the fact that it did not last as long as was hoped. Many more people new to this kind of direct action participated in the camp, showing that efforts to make these kind of protest sites accessible have been successful.

Members of CAS are very excited to soon be entering into another occupation – the fact that two will have taken place in the space of 6-7 months is a testament to the fact that this tactic of directly engaging and participating in community struggles through occupations is being used more and more and to greater effect.