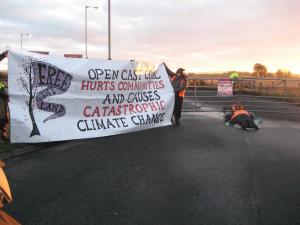 Coal Action Scotland is a non-hierarchical collective focused on challenging the massive expansion of the coal industry throughout Scotland and beyond. The primary geographical focus of our campaign has been in rural South Lanarkshire, one of Scotland’s most heavily mined and economically deprived regions which has born the brunt of almost 30 years of continuous opencast coal extraction. Opencast coal mining involves the use of massive machines to tear up and haul away top layers of soil and rock in order to get at coal seams beneath. Since the adoption of opencast mining techniques, coal extraction has provided few jobs for local people whilst creating numerous health impacts for local communities from dust, noise and HGV movement along with devastating impacts on local ecosystems and landscapes. The local effects of coal are part of a global industry of injustice and our resistance is related to our analysis of these exploitative systems of corporate dominance and their perpetuation of climate change and ecological collapse.

Scottish Coal has recently submitted 3 new opencast applications to South Lanarkshire council for roughly 5.4 million tonnes of coal to be extracted over another 14 years (in concurrence with existing active mines). We at Coal Action Scotland will be mobilizing to resist all three of these applications and our projects will be aimed at facilitating the groundswell of empowered and sustained community resistance to these mines.

Site occupations provide a key focal point for engagement with local affected communities and we have found such aspects of our campaign to be invaluable catalysts for resistance. Projects like the Mainshill Solidarity Camp and recently, the Happendon Wood Action Camp have been essential bases for all of our projects and without support from groups like APE, we would not be able to maintain these foundations of our campaign.

Our other upcoming projects include :