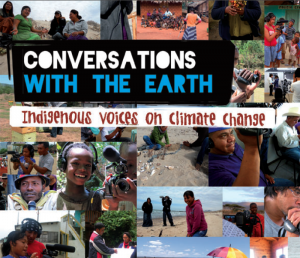 “We are a harbinger of what is to come, what the rest of the world can expect.”

Conversations With The Earth (CWE) is an indigenous-led multi-media campaign to amplify indigenous voices in the global discourse on climate change. Since March 2009 InsightShare has worked with 6 communities across 3 continents to help seed a growing network of community-owned video hubs. These hubs not only document the impacts of climate change on local ecosystems and cultures but also empower communities with tools to bridge divides, and build resilience, solidarity and hope.

CWE is about building local capacity to cope with change but also to bridge divides, to reach out to people across the developed world and inspire a shift in consciousness: a new paradigm – you could call this the ‘inner climate change’ that is required to save our planet.

Local video trainers and hub representatives were selected by their communities to participate in the UN Climate Talks (COP15) in Denmark in December 2009 and present their films. InsightShare’s goals for 2010 were to build a legacy beyond Copenhagen. One week before COP15 InsightShare held The Hou Retreat in Jutland; 20 people gathered from 8 countries including hub representatives, with the following objectives: to get to know each other, build a community feeling, develop a collective vision and local action plans. APE awarded us with support on behalf of this unique network of indigenous communities to enable delivery of both the local action plans and of the overall vision to protect the Earth’s biodiversity.

During the course of 2010 the CWE project has had great impacts, especially in terms of stimulating the Participatory Video (PV) teams in the communities to take charge over their own PV practise and putting their actions plans into practise – thanks to the enthusiastic work of the community activators. Here are some news flashes from the hubs.

Next to all the local action plans, we have witnessed a beautiful case of cross-hub thematic sharing! This process started with the production of an emotional, hopeful and inspiring video that was created as a joint-production by three indigenous communities in Peru. This video was titled ‘Derechos de la Pachamama’ (‘Rights of Mother Earth’) and documented indigenous people’s views on what the rights of our Mother Earth should be and what people should do to respect these rights. Seeing this video, inspired the Philippines PV team to produce a similar ‘Mother Earth’s Rights’ video in their own community by interviewing indigenous mothers.

To meet the growing demand and because the PV process has proven to be such a useful method for indigenous groups around the world InsightShare wishes to stimulate the further spread of the PV method and the expansion of the indigenous-led network. As a first step to expand beyond the six original hubs, Maja and Raymundo from the Peru Hub travelled to northern Mexico to work with the indigenous Yaqui and Seri (Comcaac) communities. At the moment a PV training is also taking place in a small village located within the mountainous Naryn region in Kyrgystan- where InsightShare works together with the Taalim Forum of Bishkek in order to develop their PV capacity working with shepherd communities. In February 2011 InsightShare will facilitate the first training in a two year PV capacity building process in the Gamo Highlands of Ethiopia. After which, the representatives of the 9 hubs will meet at the second Hub Gathering taking place in Peru in April 2011.

During the course of 2010 the videos that were produced by the hubs were screened at very diverse events: ranging from film festivals in Mexico, Slovenia, Rusia, Argentina and Portugal to conferences and summits like the conference ‘Towards a new justice triptych’ in Germany and the World Social Forum meeting in the USA.

In 2011 this exhibition will  be displayed in the Smithsonian’s National Museum of the American Indian in Washington, DC. Moreover, before CWE’s longterm stay in Washington DC., the mobile exhibition will travel to: Europe’s first Bioneers conference at Findhorn Ecovillage, Scotland; Governor Schwarznegger’s Climate Summit in Davis, California; the UNESCO’s ICTD Conference at the Royal Holloway of the University of London and the CEESP Sharing Power Conference in New Zealand.

Click here for dates and more information on the travels of the CWE exhibition.

1. A new InsightShare toolkit: ‘A Rights-Based Approach to Participatory Video’

This is a practical, do-it-yourself guide for leaders and facilitators wishing to strengthen their work through introducing a rights-based approach to participatory video. Compact and beautifully laid out with illustrations and dynamic links to videos and photostories this toolkit is eminently practical; full of exercises and techniques, facilitator checklists, case-studies, templates, resource lists and copies of key human rights instruments.  In it we explain core concepts such as why participatory video favours an overt rather than covert approach to helping groups shape their rights-based video messages and the importance of identifying and valuing what we call “home-known rights” to avoid imposing lists of rights that could be perceived as alien or agitating.

The stage-by-stage descriptions include some elemental processes (e.g. the storyboard technique) and some well-loved classics have been revised and refined to provide an essential update to our acclaimed practitioners’ handbook. (See below.)

The toolkit is offered free to the world as a dynamic PDF from our website.  Please feel free to download, print and share the toolkit with friends and colleagues or post this message and link across your networks.

A new translations of our handbook is also available. Since the 2006 United Nations General Assembly launch of ‘Insights into Participatory Video: a handbook for the field’ – the first practical guide to using participatory video in the international development context – the handbook has passed through the hands of over 10,000 practitioners worldwide. It has now been translated into Spanish, French, Russian and Bahasa Indonesian.  Click here to download the original version and the translations for free.

Our ‘Introduction to Participatory Video’ courses continue for the 5th consecutive year with the next round scheduled for the 20th – 24th September 2010 and 14th – 17th June 2011.  We also continue our new and very popular 2-day ‘Editing for Participatory Video’ course on the weekend immediately following the introductory course (25th & 26th September 2010 / 18th & 19th June 2011).  Click here to download a course brochure and booking form.

Please join with us or invite other people to do so.  To those already signed up, great to see so much energy and dialogue in just a few months, and more than 160 members taking part!