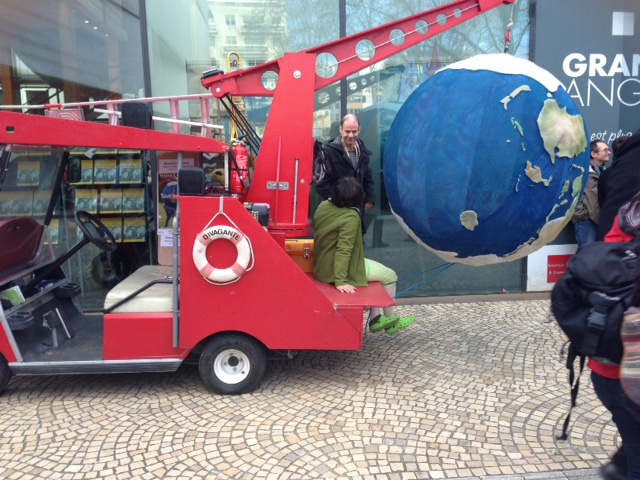 “The wheel of climate action turns slowly, but in Paris it has turned. This deal puts the fossil-fuel industry on the wrong side of history.” Kumi Naidoo

Artists Project Earth are in Paris! Our house band Rhythms Del Mundo is performing their new album, Oceans, live on Monday 7th December at COP21, to help raise awareness of climate change and ocean conservation.  In the meantime, forget #EarthToParis – Herbie Girardet, Trustee of Artists Project Earth (APE), is writing blogs direct from Paris to Earth! Read them all here.

So we have a deal – the Paris Agreement. It is a landmark time for followers and wellwishers of climate change and meetings of the United Nations Climate Change Conferences of the Parties (COPs) over the years.

The world has been put to rights, and all is well after all. Or is it?

First of all, the agreement is better – much better – than nothing. It was an enormous task to get 195 nations to come together to sign an agreement on climate change – all 29 pages of it. After 21 COPs a remarkable consensus has now been reached, acknowledging that climate change is occurring, that it is man-made, and that the world needs to come together to deal with it. And meanwhile most of the world’s climate sceptics seem to be hiding in the bushes. Phew!

But before we get too ecstatic, let sober reflection prevail: a critical point is that whilst all the world’s countries have signed on the dotted line, the world’s companies have not. The stark reality is that, by and large, it is companies that run the world, rather than governments. “It’s the market, stupid!” And whilst some governments have been making policies to regulate their behaviour, companies like doing things their way – in their own financial interest, and that of their bosses and shareholders.

As long as fossil fuel energy is cheaper than renewables; oil, gas and coal will be dispensed by the energy companies, and burned by us all in vast quantities. In Paris the world’s governments were not brave enough to commit to measures to keep corporations in check – for example a global tax on carbon that would fully cover the enormous climate externalities of fossil fuel burning. The Paris Agreement only contains vague statements about shifting government subsidies – currently around $5 trillion a year – from fossil fuels to renewables. Now just a small percentage of that would speed up solar, wind and marine energy, and energy storage, wouldn’t it! But meanwhile countries such as China, India and Indonesia are still investing massively in coal powered electricity generation, and gas guzzling cars are being produced in record numbers.

“The Paris Agreement only contains vague statements about shifting government subsidies – currently around $5 trillion a year – from fossil fuels to renewables.”

And then there is the critical issue that in developing countries billions of people are still striving to escape poverty, and rightly so. But usually this means moving from a rural village to a city where there is access to energy and the chance of a little bit of affluence. AT COP21 there was no challenge to rapid urbanisation in developing countries, and its massive implications regarding energy and resource use. As I have stated before, a villager in India, China, Vietnam or Indonesia becoming an urban dweller will typically increase her/his resource consumption fourfold. There is no prescription in the Paris Agreement about the implications of this, and whether ‘another way’ is possible.

“AT COP21 there was no challenge to rapid urbanisation in developing countries, and its massive implications regarding energy and resource use.”

Whilst $100 billion are to be paid annually towards climate loss and damage suffered by poorer countries – in the form of droughts, floods and sea level rises – much more financial support is needed to ensure that they are not left to pay the price of a climate crisis that is not of their making. $100 billion does not look anything like a full global tax on the externalities of fossil fuel burning.

Critically, the Paris Agreement enshrines no legal obligation for countries to cut their emissions, but at least it includes a five-yearly global stocktake to assess each country’s contributions.

COPout 21? Not quite. The world community now agrees that we have a major problem that needs to be addressed creatively, even vigorously. Greenpeace International executive director Kumi Naidoo has made this useful observation: “The wheel of climate action turns slowly, but in Paris it has turned. This deal puts the fossil-fuel industry on the wrong side of history.”.

You can take climate action today by downloading all or part of Rhythms Del Mundo’s pre-release of their new album, Oceans. With some of the world’s greatest artists, funds raised from this album go directly toward climate change and ocean conservation projects worldwide via Artists Project Earth.