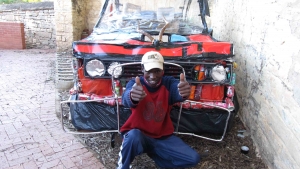 The Arkwork Collective, have worked with a group of young men and woman from the Joza Township in Grahamstown, who are involved in various informal livelihoods in the city. Through creative participatory processes that drew from sculpture, connective aesthetics, story telling and public art, the Arkwork team was able to facilitate the modelling of activities and practices to create tangible adaptations that promote “less risky” sustainable decision-making and allow the participants to effectively tell their personal stories that would otherwise remain untold.

Building on the work done last year for the 2010 South African National Arts Festival, the Arkwork Collective team felt that the participants now had the skills and confidence to envisage their own production for the 2011 Festival. The work and vision of the participants in cultivating new ideas and practices central to their experiences emerged through a complex process they adopted in creating an artwork utilising recycled materials, that reflected their current situation and their hopes for the future.

The participants conceived  and created a work entirely on their own with guidance and mentorship provided by the Arkwork Collective. The group created a large kinetic sculpture, (a car constructed completely out of recycled materials). They intended also to develop an interactive street performance that worked with the recycled car which would house the performers and car-wash equipment, with which they intended to travel around town and playfully work with the car-wash culture in Grahamstown. The sculpture itself, and the story behind its creation reflects the personal journey and personal hopes of the group, who both struggle with the their own car-wash livelihood and their dreams to one day own their own car, and improve their situation.

The informal car-washing industry of Grahamstown has attracted a lot of attention, often with negative associations, struggling with water scarcity, the dichotomy of washing cars and trying to make sense of Western consumer ideals, in their context. The participants involved in this project with the Arkwork Collective have called for the formalisation of the car-wash industry, which will make the public, Grahamstown municipality and the car-washers themselves more accountable and understanding of each other. While the municipality is open to the idea of a more formalised industry, at the moment the main obstacle is the public’s attitude towards car-washing, which often results in car-washers occupying a marginalised and reviled position in daily public life. This in turn perpetuates the equation of car-washing with begging and crime.

Numerous non-governmental organisations, government departments and academic institutions around the country have called for innovative adaptation practices in response to Climate Change in South Africa. This project is exploring local forms of adaptation that are conceived and developed by the community themselves. What is crucial is that this group is deepening their ability to respond and act in complex situations, which is ultimately the type of education needed in the volatile changing climates of the Eastern Cape.