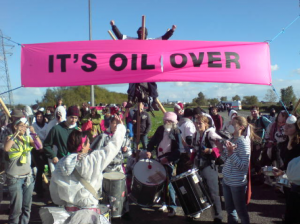 Direct action helping us to move towards an oil free future.

Crude Awakening is a project designed to kick start a social movement against oil, because if we don’t move on from oil we don’t have a chance of avoiding catastrophic climate chaos. We can’t afford to burn the oil we have already tapped into. Finding new oil reserves is the very last thing we need, and yet oil companies continue, year on year, month on month, day on day scouring the planet for the very last drops of new, dirty oil. At the same time as our government makes eye watering cuts to public services they are subsidising oil companies to the tune of tens of millions of pounds each year.

Our aim is to build a movement strong enough to pull us out of this oilly mess and towards a future beyond oil.

Our primary project took place on the16th October 2010. 500 people successfully blockaded the UK’s busiest oil refinery, Coryton in Essex,  for over 7 hours, disrupting the flow of oil to central London. A diversity of tactics, amazing creative energy, some serious preparation, amazing weather and a cunning plan to outfox the police came together in an inspiring and empowering day of mass direct action that effectively disrupted a critical piece of infrastructure in the UK oil machine.

With day of the dead stilt walkers, the Giant Chalk Army, the Noise Brigade, Rhythms of Resistance and a team of colourful web weavers The Crude Awakening was all about carnival, fun and resistance; turning the world upside down and making the impossible possible.

We gave the oil industry a Crude Awakening: and we’ll be back!

We are part of a global movement for climate justice and through our actions against the oil economy we act in solidarity with people across the world affected by the climate crisis and by the devastating effects of the fossil fuel industry. The Crude Awakening is part of the Climate Justice Action (CJA) global call for action for climate justice. CJA is a global network of people struggling against the root causes of climate change. Click here for more infomation.

“We are over the moon to have backing from APE. Our project is not likely to attract conventional funders, and we are grateful that APE saw potential in us. We are all about generating the creative, dynamic, assertive energy that we need to make real action on climate change happen. Thank you!”