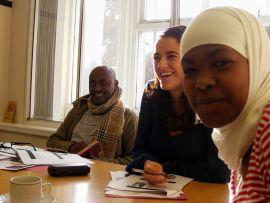 In June 2011, DEEP started its second stage to support Black, Asian Ethnic & Minority work on climate and environmental justice. Over the first 6 months we worked with fifteen communities to explore their ideas and discussions on the key climate justice issues. During this period of time it became apparent that issues surrounding DEEP generated a lot of interest particularly relating to BAME communities and climate and environmental justice.  Unfortunately, what was also apparent was the lack of support and funding available to BAME managed climate justice projects.

The project also highlighted that the groups we worked with had limited resources and that there was a need to for Capacity Global to rethink the seed funding conditions.  Whilst we had to be clear, as did the partners, that the seed grant we were offering was to support their climate justice work, we felt it was important to take out any conditions that were over burdensome. As a result, the conditions focused on how applicants would explore climate justice and activism and how the grant would support the work and the next steps they wished to take in developing their climate and environmental justice work.

We also upped the entity on the services Capacity Global would offer, which now includes funding advice, support and building a larger funder proposal for DEEP partners to work on together. We are now also able to offer extra in-kind support by offering research support from LARC, the Legal Access & Research Centre (run by Capacity Global and University College London, Environment Centre) to each DEEP partner.

We had funding and resources to support six projects with seed grants, but wanted to help the groups that contacted us to develop their ideas. What’s been clear through these conversations is that climate justice is an issue that brings people together, especially where the issues can be explored using ideas and connections from the communities themselves.

Wai Yin Women’s Society, in Manchester, have taught English to women through conversations on climate justice and food, exploring the China to UK story in food miles.

The groups DEEP is now supporting:

Each group has focused its climate justice debate around a specific issue of concern. These are food, human rights, trade, and energy.

On request of over twenty BAME groups, we will be holding a one-day workshop on Climate Change Justice in May 2012 to explore issues learnt, political platforms to use to tell the DEEP climate justice story and to build a network with climate and environmental justice activists and policy makers.

In addition we are working with DEEP partners to develop a three year project to provide resources for DEEP to build on the work that is being developed over the last two years.

We are also writing-up the DEEP projects up as ‘life story’ case studies, with photographs, written interviews and podcasts.

In order to give the groups we are working with more time to develop their projects and provide more advice and assistance, we’ve extended the project completion date to June 21 2012.

There are many projects we are already providing support to and with APE’s grant we’re really pleased to be able to help many more.