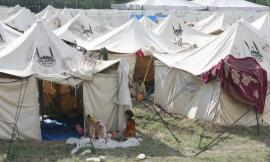 Islamic Relief has been working in Pakistan since 1991 and has played a key role in aiding and serving the people when emergencies arise. In July and August 2010, heavy monsoon rains triggered the worst floods since 1929 in Pakistan’s northwest, killing hundreds of people and forcing hundreds of thousands to flee from their homes. Many days of torrential rains caused rivers to burst their banks in several places and unleashed widespread destruction in the Khyber-Pakhtunkhwa province, destroying houses, bridges, schools, roads and railway tracks.

Amongst the worst hit areas are Nowshera Charsadda and Swat with hundreds and thousands of people without food, shelter or clean water. Now the floodwaters are surging south causing further catastrophe. “We fear the death toll will rise once the water recedes. We are facing the worst disaster in the history of our province” Information Minister Mian Iftikhar Hussain told reporters in the provincial capital of Peshawar.

Islamic Relief has launched an emergency £2 Million appeal and has already begun distributions of tents and blankets. APE has made a donation to this appeal, but much more is needed. Please donate now if you can by visiting the Islamic Relief website or by calling 0800 520 0000 within the UK or if overseas, + 44 (0) 207 593 3232.

As of 11th August 2010 Islamic Relief has undertaken the following emergency aid: