What in the world are we doing about ocean plastics?

As Hans Rosling says in his inspiring Ted Talk, everything you think you know about the world is probably wrong. Because we are fed so much negativity via the media, we think we’re going to hell in a handcart, but actually, there are lots of good things happening all over the planet – we just don’t know about them.

In that spirit, here’s one of many inspiring stories about the amazing things people do around the world to try and reduce the amount of plastic that’s entering the world’s oceans: edible six-pack rings.

If rolled-out across the drinks industry, this initiative could really help to put an end to all the suffering of turtles and seabirds that get their necks stuck in plastic rings and then starve to death. We’ve all seen the photos…

Working with Saltwater Brewery – a Florida craft beer brand targeting surfers, fisherman and ocean lovers – the New York based advertising agency ‘We Believers’ developed edible six-pack rings that are 100% biodegradable and are constructed of barley and wheat ribbons, bi-products from the brewing process itself. These environmentally-friendly six-pack rings are safe for the wildlife to eat and solid enough to support the weight and handling of drinks cans.

According to We Believers’ Founder and CCO Gustavo Lauria, five 3D printer-generated molds were used to manufacture the first batch of 500 edible and biodegradable six-pack rings for Saltwater Brewery’s main brand. In April 2016, the new packaging was introduced at local events and venues in Florida, including the Saltwater Brewery’s Beer Garden and nearby points of purchase, where consumers were able to see that the new design was as strong and solid as the environmentally harmful plastic rings.

After the successful launch, work is now commencing with engineers at a small startup in Mexico, with the aim of producing 400,000 edible six-pack rings per month, which will be enough to cover the current production of Saltwater Brewery. How amazing is that! It is important to mention that the price of Saltwater’s edible six-pack rings is higher than the price of the plastic set previously used. However, Saltwater is confident that the environmentally friendly six-pack solution will gain traction thanks to the company’s fans and customers, many of whom are surfers and fishermen – ocean lovers. The company also argues that, if larger brewers and beer industry leaders followed this example in their commitment towards protecting the environment, the production of six-pack rings would quickly become a financially viable solution with competitive pricing that could beat out the plastic rings that most beer companies use now.

How you can help, too 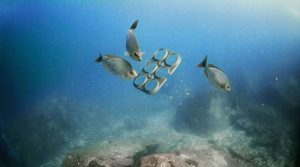 This is great news. So what can you do? Go on to the Facebook pages of your favourite brands – Coke, Budweiser, Thatchers etc. – and share this blog post. Tell them that if they used edible six-pack rings, you won’t boycott their products any more. Money talks and if enough people threaten to buy other, smarter brands, then their executives will sit up and listen. Also, Like Salt Water Brewery’s Facebook page and tell them how much their oceans-friendly initiative means to you.  Ask them what you can do to help. And finally, tell all your friend about this amazing idea, and ask them to share the news. Good things are happening folks. Don’t despair!

This blog has been compiled from the upcoming Artists Project Earth ‘Oceans Plastic’ Report, written by Professor Edward Kosior and Irene Crescenzi.