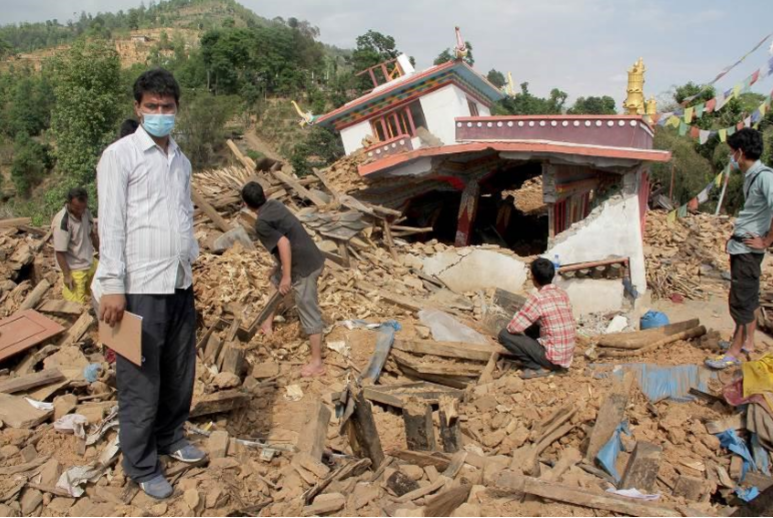 The Nepal earthquake of April 25th, 7.8 on the Richter scale, was the worst for 80 years. The epicenter was only 80km away from the capital, Kathmandu. More than 300 aftershocks rocked the region, the strongest of which occurred on May 12th with a 7.3 on the Richter scale. Almost 9,000 perished, while tens of thousands lost everything.

Artists Project Earth contributed to the emergency fund. Below is a full report on the disaster relief operation, as run and reported by ROKPA, a UK charity based in Scotland working to relieve suffering in some of the poorest areas of the world.

Between the 1st and 18th of May, a total of 10 missions inland were carried out a daily distance from Kathmandu, with the aim of providing primary emergency relief to villages where humanitarian organizations had yet to arrive.

In particular, ROKPA distributed food and tarpaulins so that people who had lost everything could build a simple shelter before the monsoon rains began in late May. The ROKPA task forces also administered first aid to the wounded and injured earthquake victims. 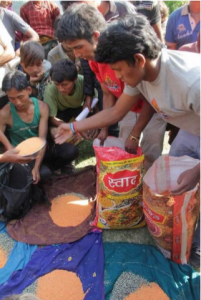 A total of around 800 households in 9 villages benefited from ROKPA’s support during this period; 150 of which were even visited twice. 5.5 tons of rice (some of it in pre-cooked flakedform), 210 kg of lentils, 265 kg of salt and 90 li of cooking oil were distributed. The 166 tent tarpaulins were particularly appreciated, because of their added potential and flexibility for use in the monsoon season as protection for humans, animals and/or crops.

Approximately 150 patients were given emergency medical assistance, some of whom were transferred to hospitals due to the severity of their injuries.

In May and June ROKPA also granted financial support to the employees of the Women’s Workshop and the Guest House who were particularly affected by the earthquake. Furthermore, ROKPA financially supported emergency assistance responses by local partners in this period. 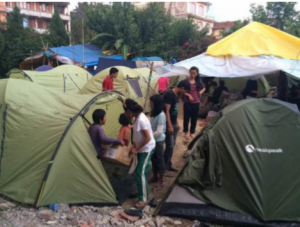 After the earthquake period occurred, a heavy monsoon season followed. During this period, many regions affected by the earthquake were difficult or impossible to reach, due to further landslides and the incapacity to repair severely damaged roads. For ROKPA and numerous other local players, the search for reconstruction projects, in areas where no help was available and where the local population was also ready to assume responsibility for the reconstruction, turned out to be very demanding. Moreover, there was political unrest in southern Nepal in the fourth quarter of the year. As a result, India then closed its border with Nepal for several months. This led to shortages of urgently needed goods such as fuel and building materials, and even skilled labor. Consequently, reconstruction work in Nepal was dramatically delayed. ROKPA had to wait a longer period before several projects could begin. Below, to illustrate a selection of ROKPA reconstruction activities in 2015:

The children, the staff at the Children’s Home, the Women’s Workshop and the ROKPA Guesthouse were extremely lucky during these devastating earthquakes: they were unharmed. A piece of land between the Children’s Home and the Guesthouse, which ROKPA had purchased in 2012 for a new project, proved to be a blessing. It enabled children, adolescents and adults of ROKPA, as well as their neighbors, to run outdoors and away from buildings that could have collapsed during the quake or the numerous aftershocks.

After the earthquake of April 25th the ROKPA children and their caregivers, as well as women from the ROKPA workshop, lived and stayed on the freestanding property, often in the pouring rain. Due to the massive destruction around, many other people in Kathmandu had to live in tents. The ROKPA property was temporarily transformed into a tent village, where the older children, the teenagers and the ROKPA employees lent a hand for the required manual tasks. Thereby about 150 people were daily supplied with the necessities during these crucial weeks.

After thorough investigations the Children’s Home was inhabitable once more. It had sustained only slight damage, as opposed to thousands of buildings in Kathmandu. By the end of the year, the minor damage at the Children’s Home, the Guest House and the ROKPA Farm in Sundarijal were repaired.

Homes for the Women of ROKPA’s Workshop

Due to the earthquake, seven women working at the ROKPA Workshop lost their homes. For ROKPA, it was very clear that long-term assistance was needed in this situation. In conversations with the women concerned, and with local ROKPA employees who themselves come from a life of poverty, appropriate solutions were discussed. This approach was taken because the affected people usually know best which kind of help is most befitting. It was decided that the women will be supported with cash, so that each finds the accommodation solution that fits her individual situation best. Some opted clearly for their own simple houses, instead of their destroyed renting apartments. A privately-owned and secure home signifies a luxury these women could have never experienced. Up to December 2015 only one woman from the ROKPA Workshop was given a contribution of just under CHF 1,000. 6 more contributions followed in the first quarter of 2016. 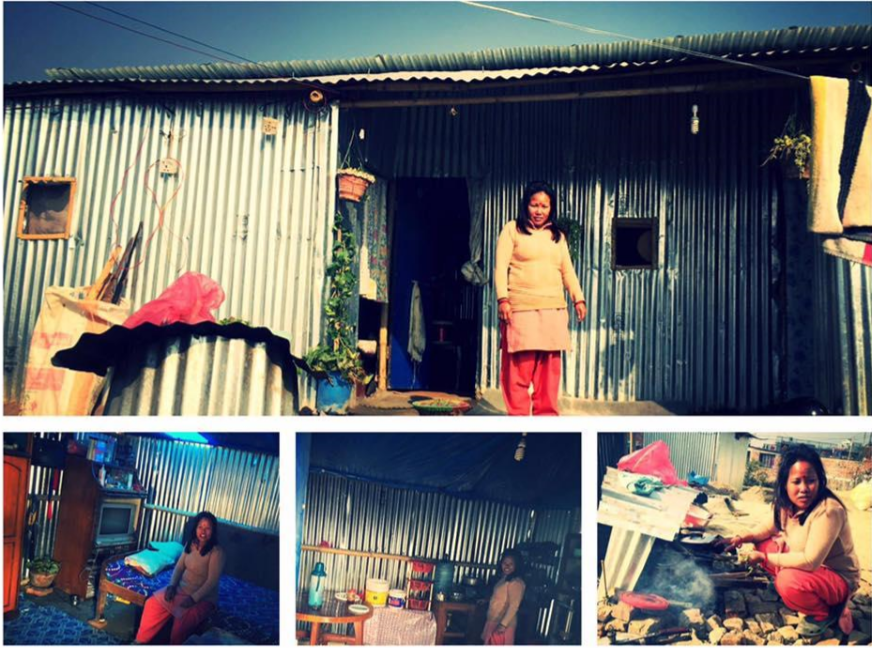 Decades of development assistance and the presence of many aid organizations in Nepal have produced not only positive effects. Nowadays, many Nepalis are accustomed to receiving help, without even contributing and without making efforts to become independent citizens.

For ROKPA, the principle of helping people help themselves is of great importance. Therefore, we consider the promotion of activities that enable beneficiaries to generate their own income as an ideal approach. ROKPA also specifically aims to empower women and girls, who are often among the most vulnerable members of society.

Thus after the earthquake ROKPA sought out opportunities to work in cooperation with experienced local partners. This led to a collaboration with a successful artisans’ cooperative that primarily integrates craftswomen from the poorest populations. A majority of the female weavers in this cooperative had lost their homes, as well as their equipment and their looms. Though customers’ orders kept pouring in, production could not be carried out. Therefore, in collaboration with the cooperative, ROKPA decided to build a workshop with nine weaving looms and a warping machine for the nine female weavers. 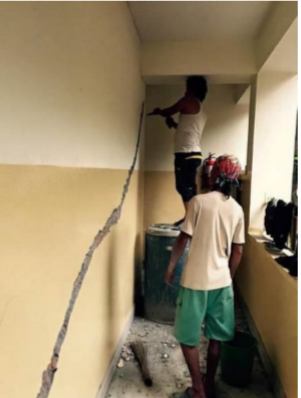 Due to the earthquake, an estimated one million children in Nepal could no longer go to school in the short term because their schools were destroyed. As education for needy children and young people is one of the core competencies of ROKPA, we decided to tackle this issue as a priority. On one hand we seek to build earthquake-resistant schools, but also to provide jobs and, of course, not only to strengthen pupils, but to accompany them as life returns to normal. Hence, on behalf of ROKPA a voluntary Swiss project leader with local experience launched the search for suitable projects in the earthquake-affected areas. Various options have been identified. Although no effort has been spared, it was only possible to begin the reconstruction of schools in 2016. On April 12th, 2016, the earthquake-proof rebuilt Dhanmale Lower and Secondary School in Jiri region was inaugurated under the presence of ROKPA founder Lea Wyler. However, rebuilding work will take several more weeks to complete.

ROKPA’s work is long-term oriented. Therefore in 2016 we will continue to work intensively on reconstruction and tackle other pertinent projects.