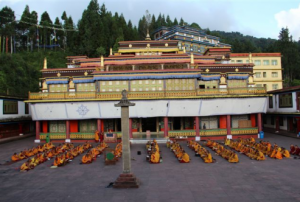 Providing support for the region around the Rumtek Monastery in Sikkim which has been severely affected by a recent earthquake.

The northeast Indian state of Sikkim is fighting its worst crisis in decades. Life in the earthquake zone has been affected severely, and the monasteries have not been spared either. More than 400 monks from the Rumtek Monastery, one of the largest monasteries in Sikkim, have been sleeping in an open courtyard since the earthquake hit on 18th September 2011.

The quake that struck Sikkim left monks and villagers alike with no option but to vacate their rooms and houses. A monk named Nima noted, “Our prayers are disrupted, we can’t go to classes. We don’t have rooms to go to. We are living in the courtyard since the earthquake. If it happens again everything will be over”. Authorities said it would take months to mend the damage.

Apart from Rumtek, 140-year-old Inchey Monastery was also hit hard by the earthquake. The quarters where the monks lived were turned into a heap of rubble. “I jumped out of the window when the earthquake shook my house,” said Purba Chiring, a monk.

The monks in the monasteries have now been praying for the lives lost and the livelihoods that changed forever, the day the earth trembled in their sacred land.