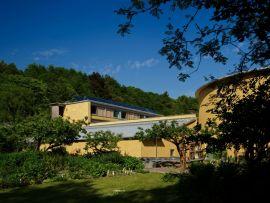 Towards a zero-carbon Britain

“The science says we must, the technology says we can, its time to say we will.”  – Enabling the Transition

Since 1975 the Centre for Alternative Technology in Machynlleth, Wales has been exploring practical solutions for sustainable living. CAT runs a range of inspirational courses that caters to all levels from taster’s to post graduate masters. The visitors centre at CAT attracts over 50,000 people a year, in addition CAT is visited by 100’s of schools, colleges and universities every year who come to learn about the work that CAT’s pioneering work.

In June 2010 the Centre for Alternative Technology published zerocarbonbritain 2030, the first fully integrated solution to the climate crisis. The report shows that we can reduce our carbon emissions to below zero and maintain a lifestyle that supports a high sense of well-being. The challenge now is to inform, inspire and enable thousands of people to join CAT in calling for a zero carbon future by 2030.

The visitors centre at CAT acts as a catalyser for thousands of people every year to put into practice more sustainable ways of living. Enabling the transition will integrate the zerocarbonbritain 2030 report written for policy decision makers into our seven acre site – in an interactive, dynamic, engaging and inspiring way.

The zerocarbonbritain report is divided into 5 areas, climate context, power down, land use, power up and framework. Enabling the transition will take the key elements from each chapter and turn them into inspirational, innovative displays that people can relate to, including short film, animations and interactive computer graphics. By enabling people to join the dots and draw the ‘bigger’ climate picture we can create awareness of the causes, impacts and solutions to climate change so that we can prepare, as a community, to move towards a zero carbon future.

PROJECT UPDATE JANUARY 2012: Our aim has been to bring the findings of CAT’s groundbreaking ZeroCarbonBritain (ZCB) project to a diverse audience through building an inspirational display in our visitor centre, which reaches 60,000 people each year.

The ZCB2030 report (www.zerocarbonbritain.org) integrates a wide range of cutting edge research and expert knowledge into a single scenario for rapid decarbonisation. It illustrates how Britain can reduce greenhouse gas emissions down to zero by 2030 and thus set a global lead in meeting the challenge of climate change, whilst creating employment, stimulating the economy, and increasing the resilience of both rural and urban communities.

The report generated an enormous amount of interest – it has been downloaded 27,800 times and around 4,000 people have read paper copies. It was featured prominently in four national newspapers and the strategy was adopted by the Campaign Against Climate Change. A huge number of groups have requested presentations from us, and we have been amazed by the enthusiasm with which the report has been received. Still, we saw that creating an accessible display in our visitor centre was vital to show even larger numbers of people that a positive sustainable future is possible, and to help catalyse action in the UK on climate change. Artists Project Earth agreed with us, and awarded funding to enable us to create such a display.

We’re delighted that the display is now in place. We have completed the production of a collection of display boards, which distil the findings of CAT’s ZCB 2030 report. They are bilingual in Welsh and English to be relevant to the greatest possible number of our visitors. Written by our researchers and display team, and designed by CAT’s graphic designer, they draw upon the images and clear presentational style of the ZCB2030 report, and summarise the report’s key findings, grouped by sector (e.g. Transport, Renewable Electricity, Land Use, and the Built Environment).

We have also completed the production of a ZeroCarbonBritain video which is shown on the CAT visitor centre display circuit. This is a great communicational tool for engaging people in an immediate way, where the boards then provide more in-depth information. The video has also just been uploaded to our YouTube:

The display is now open to the public. It has been ready for our peak time in visits from educational groups, and will be available to our peak-time visitor season in Spring and Summer.

The Centre for Alternative Technology is delighted to have received funding from Artists for Project Earth to help implement its new project Enabling the Transition. The project will integrate and develop our groundbreaking project Zero Carbon Britain 2030, via our popular visitors centre and website. Through inspirational, innovative displays including short film, animations and interactive computer graphics we aim to enable people to join the dots and draw the ‘bigger’ climate picture, creating awareness of the causes, impacts and solutions to climate change so that we can prepare- as a community to move towards a zero carbon future.
_________________________________________________________________