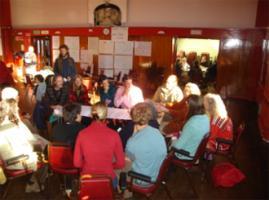 The theory of energy-descent has even been discussed on BBC Radio 4’s The Archers! This is truly an idea whose time has come.

Transition Town Totnes (TTT) began in late 2005 when Rob Hopkins and Naresh Giangrande initiated a series of talks and film screenings to raise awareness about the issue of peak oil. This resulted in a strong community response to cut the town’s carbon emissions to zero within twenty years and to build the town’s resilience, that is, its ability to withstand shocks from the outside, to be more self reliant in terms of food, energy, employment and economics. Its purpose is to act as a catalyst and unlock the collective genius and enthusiasm of the people of Totnes and to harness the untapped power of engaged optimism.

This project aims to engage the whole community in producing an Energy Descent Action Plan (EDAP), a vision of Totnes in 2030 – an abundant, resilient and desirable low-energy destination. Once a vision has been created, they will work together to identify which projects and activities need to happen to achieve successful energy descent. Support will be given in fundamental project management so that local people can turn their energy and creativity into real projects and new businesses that actually change the community; a community of continuing energy reduction, re-localisation of services and increasing self-reliance.

”The money received from APE will fund core parts of the Energy Descent Pathways project, and we are very excited to be able to get this going. The work will be recorded on our website and we hope it will inspire lots of other communities to create similar visions of how they want their future to be.” Transition Towns Totnes