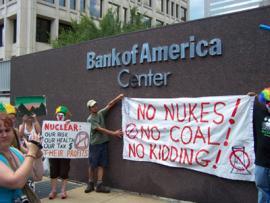 Rising Tide North America is a grassroots network of groups and individuals who take direct action to confront the   root causes of climate change and promote local, community based solutions to the climate crisis. Their strategy is based on a no-compromise approach of stopping the extraction of more fossil fuels and preventing the construction of new fossil fuel infrastructure.  They encourage communities to join together and take bold, creative actions in the face of impending crises.

The project which is now in its second year will promote three geographically separate Convergences for Climate Action in July/August 2008. Building on the success of the Convergences of 2007, it will bring diverse groups working on climate change and energy issues together while emphasising social justice. Workshops, strategy sessions and a day of action will be timed with climate camps throughout Europe. The goal is to network, skill-share and strategise on how regional groups and movements can work together to combat climate change through a just, rapid transition away from fossil fuels. The events will be located in areas heavily impacted by the fossil fuel industry and organised in collaboration with the local activists already working on these campaigns. The Convergences for Climate Action will be held in Oregon, Virginia, and New York.