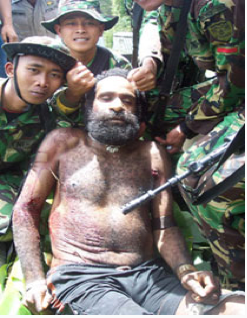 The ‘Free West Papau Campaign’ gets underway this week in support of the International Lawyers for West Papau, who are presenting the legal case that West Papua has the right to self-determination under international law, at the High Courts in London on 12th October at 6.30pm.

West Papua has been under the military occupation of Indonesia for over 40 years, resulting in the rape, torture, imprisonment and death of hundreds of thousands of indigenous West Papuans, plus massive environmental destruction and deforestation due to extraction of gold, copper, oil and other natural resources. Shockingly this has gone practically unnoticed by the internationally community all these years.

Lush Cosmetics is supporting the campaign in all 100 shops in the UK and Ireland this week, and more details are on thier website. They will be donating all proceeds of their perfume ‘The Smell of Freedom’ to the Free West Papua Campaign.