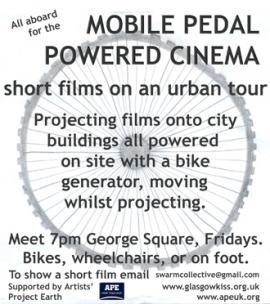 Re-imagining the city and nurturing awareness via the world’s first mobile pedal-powered cinema!

Glasgow Kiss was formed in 2005 for the G8 protest in Scotland. It trains in clowning and buffoonery and instigates carbon free creative actions on subjects such as consumerism, the Iraq war and climate change.

The aim of the project is to construct a pedal powered generator to be used with a low wattage LED projector, mp3 audio visual technology and low wattage speakers, to construct a fully mobile cinema.  Weekly ‘on the move’ short film nights will be held, using films that have been put together specifically for the outdoor urban environment. This is hoped to generate ways of re-imagining the city as is necessary to tackle climate change and nurture an awareness and responsibility of the spaces we live in.

We are delighted to be supported by APE in our latest project to disrupt the consumer spectacle and be creative in our relationship to the urban landscape. We hope to open out space for critical thinking regarding social space, ecology and the metropolis. This can in turn generate ways of re-imagining the city as is necessary to tackle climate change, and nurture an awareness of agency and responsibility in the spaces we live in. ” Glasgow Kiss