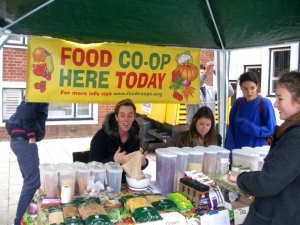 Students get active on climate change!

As part of Go Green Week day of action, students demanded the Coalition government live up to its promise to become the greenest government ever and take urgent action to secure the education sector’s transition to a low-carbon, sustainable future that can create green jobs. 474 students wrote directly to Universities Minister David Willetts throughout the course of Go Green Week.

A wide range of academics, MPs and representatives for literally millions of students and staff signed an open letter which was published in the Times Higher Education magazine.

Better World Books: Provided 33 groups with resources to collect unwanted books that are now being redistributed to literacy charities or recycled.

Every Can Counts: Provided 13 groups with the resources needed to stage a ‘Can Film Festival’. Groups co-ordinated film screenings with an environmental focus and the entrance fee was paid in used cans to promote can recycling.

NUS: The NUS encouraged each of its 220 student unions to get involved with Go Green Week and supported us with marketing & media work throughout the week including blogs, live forums, a bespoke website and their printed newsletter Spotlight.

Students at Exeter University took over their brand new Forum Piazza on campus in aid of Go Green Week’s national day of action and arranged a Come Veg With Me event. Exeter People & Planet group leader, Eleanore Henderson, said: “We created a large ‘Go Green’ slogan out of plants borrowed from the Campus Grounds, produce from our Community garden and recycling to try and be as visible as possible and attract lots of interest as part of Go Green Week’s national day of action. We also invited the Vice-Chancellor to attend our Come Veg With Me Dinner where we asked him to sign the letter for David Willetts.”

Chester students are storming ahead with their Big Green Makeover project and have trained 45 volunteers in energy auditing. They’re currently doing 6 home energy audits every week! Student and project leader, James Taylor, said: “The mission of the Big Green Makeover is to engage with as many students and staff at the University as possible. It attempts to redefine sustainable lifestyles as a smart, fashionable and fun way to live.”

We are incredibly grateful to APE for their continued support. Go Green Week 2012 couldn’t have happened on this scale without you. Thank you!