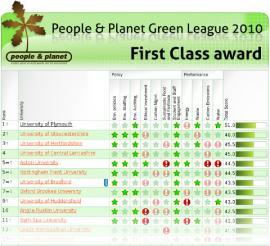 Since the launch of ‘Going Greener’ at the Shared Planet conference in November 2010, People & Planet has trained and supported at least 36 student groups to run the Going Greener campaign in their universities and colleges. Using the Transition University model developed and pioneered by students across the People & Planet network, we supported students and staff to roll out creative projects and solutions-focused campaigns to tackle their institutions’ climate impacts.

Together, People & Planet groups have reached over 22,700 people with the Going Greener resources, films, training and events we developed, and have engaged at least 2,210 students in practical action to reduce carbon emissions at their institutions by 5% annually. The small-scale transition projects at 20 universities alone have already generated carbon savings of around 1,236 tonnes.

In February 2011, a record-breaking 117 universities ran a Go Green Week calling on the Government and their institutions to “CUT CARBON, NOT EDUCATION”. Student groups and unions at 47 institutions used the week to launch practical, carbon-reducing projects including:

• Cut the Carbon Day of Action

12 People & Planet groups took photos of themselves spelling out our message to Universities Minister David Willets and one group lobbied him in person. 140 people also wrote to David Willetts via our e-action.

In March 2011, we held the second annual Transition University network conference in partnership with Transition Edinburgh University. The Grassroots Climate Exchange event brought together 120 contributors from 20 universities and colleges to share knowledge, ideas and spread People & Planet’s Transition University model to others nationally and internationally. Attendees were from across the UK from Aberdeen to Exeter, and around the world from Canada, Portugal, Belgium, Japan, and Greece.

The People & Planet Green League 2011 (to be published on 7 June 2011) will demonstrate whether student-led projects and their Transition University campaigns can deliver big results and drastically reduce the sector’s impact on climate change. Over 150 universities took part in this year’s Green League questionnaire in February 2011, and the finished ranking table will reveal in June the levels of carbon savings, water reduction, recycling rates, energy-saving and take-up of sustainable food, ethical procurement and sustainable curriculum initiatives across the sector.

People & Planet has also secured a media partnership with The Guardian to raise the profile of the Green League 2011 and in coming months also plans to roll out the results via an iPhone App for students and integration of our results into a variety of standard league table rankings such as the Complete Universities Guide 2012 which reaches over 400,000 people monthly.