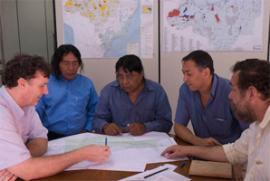 The Amazon forest is at risk of drying out as an early result of climate change. This is made worse and is accelerated by logging and deforestation. Destruction of the forest will damage the climate system which provides rainfall to the south of Brazil, Argentina, Uruguay and Paraguay, putting the whole of this huge, agriculturally-productive region at risk of desertification, bringing it into line with other land areas in the same latitude such as the Atacama desert, Namibia and the Australian outback.

Worse still, the destruction of the Amazon rainforest will release an inconceivable amount of carbon into the atmosphere as a potent mix of carbon dioxide and methane, causing a rapid increase in global warming, which will affect the entire planet. It is therefore vitally important to take every possible step to reduce and ultimately to halt completely the destruction of the Amazon forest.

The Heart of Brazil Expedition will navigate an open boat along the entire length of the Amazon’s Xingu River and will visit around fifty Indian villages along the way, with the objective of highlighting the important part the Indians play in maintaining and conserving the Amazon rainforest, thereby mitigating the effects of climate change. The research and information gathered from the boat journey will result in a public education/information programme in the UK and Brazil using various media such as radio and television broadcasts and documentaries, a book, a travelling exhibition, talks and seminars.

Other projects will provide assistance to the indigenous communities in policing the boundaries of their land, and in developing appropriate sources of income to sustain their way of life without endangering their culture or their environment. Indigenous communities are key to reducing and ultimately to halting the destruction of the Amazon forest; “If the Indians go, the forest will fall”.