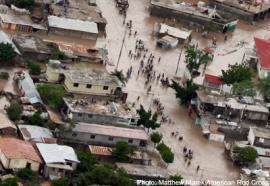 Providing emergency aid to Haiti in the aftermath of recent storms

In 2008, Haiti was hit in the space of a month by tropical storms Fay and Hanna and hurricanes Gustav and Ike, leaving about 550 people dead. Prime Minister Michele Pierre-Louis has said that up to one million Haitians may be homeless.

It is not just short term emergency relief that people need: without seeds to replant or livestock to replace those that were killed, hundreds of thousands of people in Haiti will have no way to feed themselves for months to come.

APE has sent funds via MSF and OXFAM to support those who need help.