Artists Project Earth call for ‘fracking’ to henceforth be referred to as ‘fracturing’ – to remind people of the reality of what is actually happening: the fracturing of the UK landscape. To paraphrase Chief Seattle, “What we do to the earth, we do to ourselves.” Therefore, if we fracture the earth we fracture ourselves.

‘Fracking’ is a controversial method of extracting shale gas from underground reserves using the ‘hydraulic fracturing’ process. The issue has received a lot of media coverage in the past due to the environmental concerns expressed by many of groundwater contamination, greenhouse gas emissions and earth tremors. Fracturing is in the news again because of the UK government’s renewed push to extract shale gas as part of its energy policy. Click here for an overview of hydraulic fracturing

The UK government has released multiple statements during the summer of 2013 promoting fracturing, and has recently established new legislation making it easier for planning permission to be forced through without local consent (click here and search ‘Fracking’ for details). The government is also reducing corporate tax for energy companies to make it more attractive for them to invest in fracturing. According to Patrick Wintour’s article, George Osbourne is concerned that without fracturing, the UK will lag behind other nations in terms of energy resource acquisition. Wintour goes on to note that the ministerial statement on local planning states “the government is creating the right framework to accelerate shale gas development in a responsible and sustainable way”.

However, George Monbiot, in his ascerbic article on the matter, claims that this ‘dash for gas’ is nothing more than macho posturing by government ministers. Monbiot states that fracturing is neither the most profitable means of energy production, nor the most environmentally sound. He asks a fundamental question: why are we fracturing the earth for (expensive) shale gas, when we have vast amounts of methane gas just waiting to be harvested, in the form of household, human and farm waste. He also notes that a planning application for a wind farm may be rejected on the grounds that the local residents object, whereas planning permission for a shale gas mine will not take into account the complaints of residents.

Daniel Boffey and Tracy McVeigh note in their article that “planning authorities have been banned from considering whether renewable energy plants would be a better fit for their communities, if they receive an application for a hydraulic fracturing mine”. They also note that protesters at Cuadrilla’s mine site in Balcombe, West Sussex, announced the results of a survey conducted amongst the community that states 85% of residents are against hydraulic fracturing. 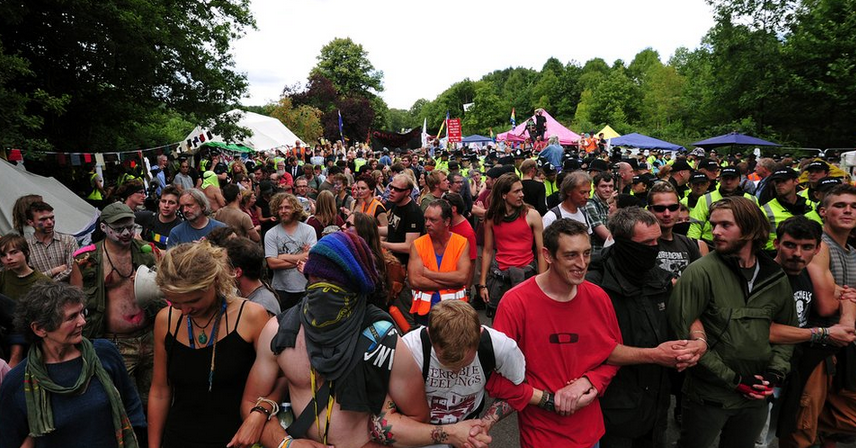 This discontent again came to a head on the 19th August, when Green Party MP Caroline Lucas was arrested for her involvement in the protests at Balcombe. According to the BBC’s article, Lucas claims “I have tried to use the democratic processes… the government isn’t listening”. The environmental dangers and impacts of fracturing are one of the main factors causing residents and MPs to protest. Further to these understandable concern, the RSPB has formally challenged fracturing, claiming that the mines could disrupt enormous numbers of migratory swans and geese in the Lancashire and West Sussex areas. Roger Harrabin notes in his article that the RSPB claims “regulations are inadequate to ensure water, landscapes and wildlife are protected”.

With thanks to George Warburton for researching this article.

It seems the Independent’s article (below) earlier in the year stating that the government was backtracking on fracking plans, was little more than wishful thinking. The day before the Chancellor’s Autumn Statement (wierdly given in December – maybe climate change has confused his seasonal senses too) and only a few short days after devastating flooding throughout the UK and in the midst of climate negotiations at COP18, it seems George Osbourne is about to open more floodgates with a mad, climate-frying “dash for gas.” Damain Carrington’s blog in The Guardian outlines in no uncertain terms, what this means for the climate.

Once the Autumn statement has been released, we will make further comments on this page. In the meantime, if you are against Fracking, please sign our petition, which (as soon as we have significant numbers) will be forwarded to the Chancellor.

The UK Government Backtracks on Fracking 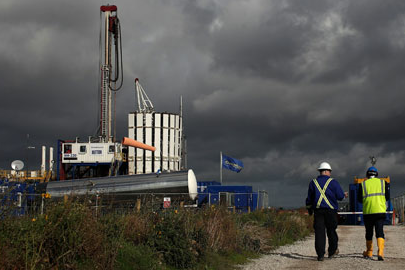 On 20th May, the Independent Newspaper revealed that the UK government has rejected shale gas technology as a solution to Britain’s energy crisis, conceding it will do little to cut bills or keep the lights on. Industry experts recently made clear at a meeting attended by senior ministers, including David Cameron and Ed Davey, that the UK’s reserves were smaller than first thought and could be uneconomical to extract. “The reserves aren’t absolutely huge compared with the likes of America, Ukraine and North Africa,” said a senior government source. “And we are relatively densely populated. It is a question of how much we can get out, and at what cost. There is a not-insignificant amount of domestic supply, but not a game-changing amount.” Senior coalition figures have since agreed that shale gas has the potential to be deeply controversial without securing major benefits in lowering carbon emissions or reducing energy costs.

The revelation is welcomed by green campaigners who have voiced serious concerns about the environmental impact of fracking, including the potential for it to trigger earthquakes and contaminate water supplies. Joss Garman, from Greenpeace, said “The shale gas bubble has burst. Despite all the hype, even the energy companies now acknowledge shale gas isn’t the answer to Britain’s energy needs. Ministers are having to face up to the fact that there isn’t much of it, it won’t bring down bills, and it’s damaging to our climate.”

Mr Davey now rejects the idea that a rush to bring shale gas online will have the biggest impact on reducing household energy bills. Speaking after the Downing Street meeting, he said industry experts were “clear that it would take time for shale gas to be exploited in the UK” and cautioned that the reserves “are not quite as large as some have been speculating”. While some shale gas exploration in the UK could still go ahead, it will be “very cautionary”, with tight regulations on both environmental impacts and the effects on people living near by.

At a Fracking webinar held in March 2012, APE learnt the true extent of the potential for shale gas extraction in the UK and what that could mean for local communities and the climate.
Dustin Benton, Senior Policy Advisor from the Green Alliance talked about the realities of shale gas extraction: he believes that the shale gas industry has made overblown claims about the amount of gas available in the UK. The Estimated Recoverable Recources image to the right shows that shale gas (in yellow) has relatively limited reserves compared to both coal bed methane (orange) and underground coal gasification (red). Indeed, the Marcellus Shale Gas Resource cut its projections by 80% meaning that the potential for cheap shale gas replacing dirty coal – which is a key selling point of the industry – is unlikely.

Benton sites statistics from the US – where fracking has been taking place for years – revealing the full life-cycle evaluation of fracking wells only just breaks even and profitability continues to decline even at the current high gas price level.

Another ‘myth’ pedalled about shale gas extraction is that the drilling pads are relatively benign environmentally, but an aerial photograph taken in the US showed that not to be the case because, unlike open-cast mining where there is one massive site, there are many hundreds of shale gas drill sites with all the necessary roads and clear-cut felling of forests to maintain them. When these sites are in populated areas, their impact on health and wellbeing of local communities is equally destructive.

Worryingly both Dustin Benton and Nathan Roberts from Frack-Off believe that because of the massive UK reserves of coal that are difficult to mine in conventional terms, there is a move towards Underground Coal Gasification where coal is, in effect, set alight under ground and burned in-situ, with the collection and use of the off-gases to create energy. There is a debate about the environmental impacts of UCG because it negates the need to strip-mine and reduces sulphur dioxide and other gases, however it is believed that groundwater contamination could be a serious issue as would be containment of the underground fire.

As Nathan Roberts concluded in his talk “Shale gas is just the tip of the iceberg.” He urged us to become acquainted with the issues surrounding these ‘new’ fossil fuel energy sources, and advocated that the best way to address concerns is for community groups to come together and get active and informed about the many proposed shale gas and UCS sites around the UK

Click here to watch a BBC Newsnight clip about Fracking. Despite the limited regulatory framework and contaminated, radioactive water, APE’s major concern is just what are those ‘chemicals’ that are regularly referred to, but never named… (Start clip at 17 minutes, 44 seconds.)

Flaming Drinking Water? No Fracking Thanks!

For the first time in Britain, a controversial technique to extract gas by underground explosions has  been given the go ahead by MPs on the Energy Select Committee. Supporters say the drilling technology of fracking or hydraulic fracturing can unlock a “Saudi Arabia” of natural gas just beneath our very feet. Engineers from the company Cuadrilla are now searching for what’s called shale gas in West Lancashire near Blackpool and supporters argue it could revolutionise world energy markets.

But is fracking safe?

Hydraulic fracturing is a drilling process that injects millions of gallons of water, thousands of gallons of sand and an unregulated cocktail of chemicals (which companies are not required to disclose), at high pressure into oil or methane gas deposits.

Methane Escape? Flaming water ought to be a clue

In Pennsylvania, USA, some householders can now set fire to their drinking water after methane gas leaked into wells. They are blaming shale gas extraction. Numerous videos are available on the web showing these extraordinary scenes.

The hydraulic fracturing industry vigorously denies that shale gas is unsafe and blames pollution incidents as examples of bad practice, rather than an inherently risky technique. However, America’s Environmental Protection Agency (EPA) is currently investigating fracking and expects to report in 2012.

With the global demand for energy on the increase, the British government is cautiously optimistic about the so-called shale gas revolution. It also means the massive expansion of shale gas in the US and also possibly in China may depress global gas prices and cause countries to favour gas over coal.

But APE argues that we must practice the ‘Precautionary Principle’: there must be a moratorium on shale gas extraction until allegations about the technology and its effects on drinking water, ecosystems and the climate can be thoroughly researched. We also want to see a study examining the carbon footprint of the full lifecycle process, from the site preparation to the gas being extracted and delivered.

MPs say the UK government will need to be vigilant to ensure shale gas extraction does not pollute or produce excessive greenhouse emissions. Let’s hold them to that. Let’s lobby to make sure our MPs take our concerns on board, all the way to the House of Commons. Let’s ensure that renewable technologies for combating climate change remain at the forefront of a UK energy revolution.