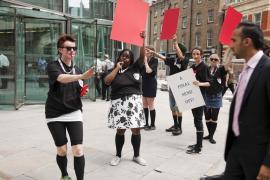 In this project, Artists’ Project Earth supported Interference 2010, a weeklong action workshop at London-based arts organisation Artsadmin, and the London and UK hosting of the Ecotopia Biketour 2010, an eco-mobile do-it-yourself activist community, taking place in a different part of Europe every summer.

Interference 2010 was hosted and coordinated by Artsadmin and led by artist/activists Julie Hill and Beth Whelan. 20 participants took part in a programme of workshops, talks, visits and activities in an ‘action workshop’ format based at Toynbee Studios, and taking place across London. During the week, we experienced and took part in discussions, workshops, visits to, play and projects with:

On the final day of the week, along with a full group evaluation of the project, the participants wrote texts and selected images for a publication ‘A is for Action’ to record what they learned and acted on during the week, which was then designed and published by Julie Hill. A PDF version of the book is available on Artsadmin’s website.

Alongside the activities described above, the Ecotopia Biketour 2010 community also joined the Interference group during the week, and led workshops on the final day. On the Friday evening both Interference and Biketour participants took part in London Critical Mass as a final celebration of the week’s activities. The Biketour participants then travelled by train to Darlington to begin the two-month long journey through England, Wales, France, Belgium, and the Netherlands towards the Climate Camp in Germany at the end of August 2010. During nearly four weeks in the UK, 20 activist participants from the UK, Netherlands, Portugal, Australia, Romania, Croatia, Serbia, Germany, South Africa, Belgium, Ukraine and France cycled 600 miles and were hosted by 18 different communities, most of which were activist or ecological projects, including:

In each location the Biketour participants had the chance to share knowledge with and support the groups we were visiting, and also took part in actions in support of them where possible.

Artsadmin is a producing organisation which provides a comprehensive management service and a national resource for contemporary artists who cross the spectrum of new theatre, dance, music, live art and mixed media work. ?