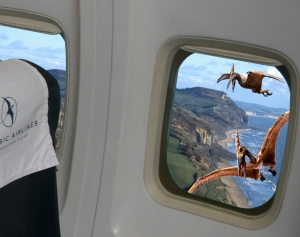 A festival of climate change awareness-raising

The Jurassic Coast Earth Festival 2012 is raising climate change awareness and encouraging climate-responsible behaviour through the creation of Onboard – a multi-sensory carbon-neutral ‘flight’.

Onboard – a World Heritage Class flight – uses a range of sensory effects and immersive video, synchronised to motion, to explore global environmental issues in relation to the passage of time. It will involve an airport installation leading to a sensory panoramic flight within a 4d motion theatre.

Onboard aims to deliver entertainment with education, through a unique dynamic medium.

Seeking to combine the arts, geosciences and technology into a multilayered story, Onboard, will fly above, below and beyond our coastline, link to other World Heritage sites and raise awareness about climate and environmental change on its journey through time and place.  Click here to see a prototype of the film to be shown inside the aircraft.

Onboard is an Earth Festival commission, and will feature in Weymouth as part of the Maritime Mix for the London 2012 Festival. It will be situated in Weymouth Pavilion forecourt, next to the big ICCI dome, during the Olympics and Paralympics (and in between). It will also feature in Lyme Regis at the launch of the Earth Festival (May 2012)

The Onboard project is created by experiential artist, Richard Hartnell, in partnership with ICCI (Innovation for the Creative and Cultural Industries, at Plymouth University) for the Jurassic Coast Earth Festival 2012.

The Jurassic Coast Earth Festival 2012 – a celebration of England’s only natural World Heritage Site and our shared global natural heritage. The Jurassic Coast Earth Festival runs from 4 May to 9 September 2012. It will animate the spectacular setting for the London 2012 sailing and windsurfing events and make links with communities in other natural World Heritage Sites, and encourage people to live more sustainably today. It will be launched at the Lyme Regis Fossil Festival (4–6 May 2012), have a significant cultural programme in Weymouth during the Olympics, and encompass a series of associated events in coastal and Gateway towns. The Earth Festival’s education strand – Big Jurassic Classroom – will teach young people in all Dorset and East Devon schools about the World Heritage Site and how it relates to the Olympic Values.

As a World Heritage Site, the Jurassic Coast is part of a large international family managed by UNESCO. UNESCO has a special mission to build peace and promote sustainable development through education, sciences and culture. The International Olympic Committee has a similar objective, to promote a culture of peace through sport and friendship. The Earth Festival has UNESCO Patronage, and works closely with the Southwest Cultural Olympiad Programmer.

“The Jurassic Coast Earth Festival 2012 has international as well as local significance.  It brings to new life the world of 185 million years ago: the disposition of the land, the character of its climate and its seas, and the creatures who inhabited it, in a real sense the cousins or the ancestors of those who live today.  The Festival serves to promote public understanding of science in its myriad aspects, and helps to engage us all in stewardship of our most precious environment.” Sir Crispin Tickell

We are very grateful to Artists Project Earth for support to the Jurassic Coast Earth Festival. This will contribute significantly to achieving our ambitions to raise awareness about climate change, and to promote sustainability and environmental stewardship.